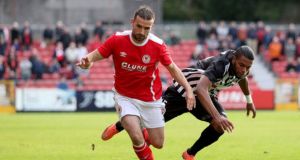 An early winner on the night from Christy Fagan set a new European scoring record for St Patrick’s Athletic.

But Liam Buckley’s side left themselves with a fair task ahead of themselves as they failed to fully imposed themselves on Jeunesse Esch at Richmond Park on Tuesday night.

And with just one goal in it, St Patrick’s can expect the Luxembourg side to be a different proposition back in the Grand Duchy next week.

The tenacity and craft of Fagan brought St Patrick’s the game’s first chance on five minutes, his low cross with just too much pace on it for the in-rushing Graham Kelly.

And it was Fagan who duly broke the deadlock five minutes later to give the Inchicore side the start they would have craved.

The frame of their goal initially saved Jeunesse from Darren Dennehy’s header from Conan Byrne’s first home corner of the night.

The big central defender gathered the rebound to cross for Fagan to score with a diving header, a strike which saw him become the club’s leading scorer in Europe with five goals.

Following a little scare, when Ken Corral’s chip scarcely troubled Brendan Clarke from Jeunesse’s first attack, Fagan just failed to connect with Kelly’s diagonal at the other end on 19 minutes.

And though the game became a little flat, St Pat’s raised the tempo as the interval approached with Kelly, and then Fagan, heading wide from superb deliveries in from the right from skipper Ger O’Brien.

And the lead really should have been doubled on 40 minutes as Ian Bermingham met Billy Dennehy’s cross only to head wide from close range.

Jeunesse enjoyed a good deal of the ball early in the second half and really should have levelled 11 minutes in.

Giancarlo Pinna’s cross was flicked on by Martin Ontiveros for striker Patrick Stumpf who somehow sliced over the bar, much to St Pat’s relief.

Sean Hoare did have the ball in the Jeunesse net on 73 minutes, but it was ruled out for an offside.

Jeunesse then came close again to levelling four minutes later as the impressive Darren Dennehy cleared off the line from a Robin Mertinitz header.

St Patrick’s pressed late on with Fagan’s powerful shot bringing a parry save from Marc Oberweis in the visitors goal 11 minutes from time.

But this was a far from convincing display by Buckley’s side as the tie remains very much in the melting pot ahead of the second leg.