Dundalk keep their noses in front as Cork defeat Sligo 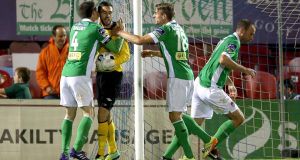 With their main title rivals showing some real character to win and keep up the chase, this was an important win for league leaders Dundalk who have played much better this season but still dominated against a UCD side that showed little evidence of the sort of urgency their increasingly perilous position suggests they should possess.

Having opened the scoring with a heavily deflected shot 10 minutes in, Richie Towell looked through the opening stages as if he might run riot but neither he nor his team-mates quite delivered on their relentless superiority.

On the very odd occasion, their hosts threatened to make them pay for their lack of punch around the penalty area but they generally struggled to get within 50 metres of the box themselves with Aaron Callaghan’s players far too slow to get forward in support of lone striker Conor Cannon on the rare occasions they had what looked a promising opportunity to break.

Hoban finally grabbed the goal that made things safe almost out of nothing 20 minutes from time with the striker simply cutting inside his man and letting loose.

Mark McNulty was the hero for Cork City as they kept the pressure on Dundalk at the top of the Premier Division. After goals from John O’Flynn and Billy Dennehy cancelled out Danny Ledwith’s opener, the shot-stopper produced a sensational last-minute penalty save to ensure that the home side collected maximum points.

The Bit O’ Red deservedly took the lead after 30 minutes through a sensational Ledwith shot from 35 yards as the left back found himself in acres of space before smashing the ball past Mark McNulty.

Nevertheless, the Leesiders did not let their heads drop and came roaring out in the second half, bagging an equaliser through substitute O’Flynn, who demonstrated his predatory instincts to stab past Gary Rogers from a deft Mark O’Sullivan flick on.

John Caulfield’s side then completed their comeback through Billy Dennehy. The winger controlled a long clearance from McNulty and exhibited tremendous determination and composure to breeze past his marker and finish.

St Pat’s were the happier of the two sides after this draw between the two teams battling it out for third place in the table and the Europa League place that goes with it. Pat’s occupy that spot now with a seven-point lead over Rovers, albeit with a game more played.

Gary McCabe put Rovers ahead on four minutes before Conan Byrne got Pat’s level on the hour in this entertaining game at Richmond Park.

Rovers had an excellent start and took the lead on four minutes following sloppy Pat’s defending. Ger O’Brien knocked on a cross by Rovers’ Simon Madden but the fall perfectly for McCabe on the right of the box to slot past Pat’s goalkeeper Brendan Clarke

Pat’s were a different side in the second half and after several near misses got back on level terms on 60 minutes via a brilliant Byrne volley, his 18th goal in all competitions this season.

Goals in each half from veterans Jason Byrne and Dave Mulcahy maintained Bohemians’ fine end of season form at Dalymount Park.

Though Limerick passed the ball well, it was Bohemians’ more direct approach which brought them the lead on 39 minutes.

For the opener, Dinny Corcoran put strike partner Byrne in on goal. And though Barry Ryan parried his initial shot, the 36-year-old striker followed up to dink the ball to the net.

Limerick thought they’d levelled on 63 minutes but for a clearance off the line by Derek Pender from Rory Gaffney from an Ian Turner cross.

Bohemians then struck for their second goal on 71 minutes when skipper Mulcahy’s powerful downward header from Karl Moore’s corner found the bottom corner of Ryan’s net.

Indeed, having now recorded their sixth consecutive draw, Athlone moved to within a point of UCD in their battle for survival.

In fact, the basement side took a shock lead in the ninth minute, the Derry defence caught napping. Seán Brennan gained possession when in space and fed the ball through the centre to Derek Doyle and as Derry goalkeeper Ger Doherty advanced the Athlone winger guided the ball into the net off the butt of the upright.

Derry woke up and attacked the visitors and the pressure paid off in the 29th minute when the Athlone defence failed to clear their lines adequately and when the ball dropped into the path of Rory Patterson, Derry’s top hitman lashed the ball home from 16 yards.

After the break Patterson had a glorious chance to put his side into the driving seat but he drove the ball into the ground as it made its way over the Athlone crossbar in the 66th minute.

Nine man Bray Wanderers moved a step closer to Premier Division survival as they drew 1-1 with Drogheda United in a controversial clash at United Park.

Adam Hanlon gave the visitors the lead in the second half but substitute Paul Andrews drew Drogheda level before Ismihal Akinade and Shane O’Connor were dismissed late on for the Seagulls.

Akinade was dismissed for an elbow on Roy Kierans before O’Connor was sent off for a high challenge on goal scorer Andrews.