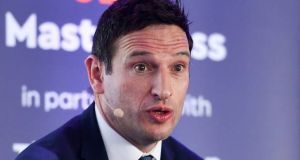 Noel Mooney worked previously in the FAI as national club promotions officer before moving on to work for Uefa. Photograph: Lorraine O’Sullivan/Inpho

The FAI has declined to comment on the suggestion that the association’s former head of marketing and promotions, Noel Mooney, is about to return to the association in a leading role.

Although he would not get the CEO title, it seems that Uefa is about to entrust the Limerick man with overseeing things at Abbotstown as they take a much more central role in funding the troubled organisation’s day to day activities.

Mooney, who kicked off his career in the game playing in goals for Shamrock Rovers, Cork City and Limerick before being brought into the association as national club promotions officer by John Delaney in 2006. He left six years later for Uefa where he worked first in its marketing department and, more recently, as head of national associations business development.

Rumours that he was in the running for the top job out in Abbotstown have been circulating for a while.

Members of the FAI’s Council were told on Wednesday that Uefa would guarantee funding to the FAI as it seeks to reform its governance structure with the Federation believed to have effectively offered a €10 million credit facility. But they were also informed that there was the offer of support in terms of personnel and logistics on the table too and Mooney, it seems, is set to be sent to Dublin as a major part of the package.

He has already visited Abbotstown and his appointment, for an initial six months, is expected to be made next week. The exact title he will be given is not clear and Rea Walshe may formally stay on as interim CEO but the understanding is that Mooney would effectively be in charge.

The move, assuming it is confirmed, would dismay most of those who have been critical of Delaney over the years and hoped that his eventual exit from the organisation might pave the way for really fundamental change.

Mooney is widely regarded as having been a long-standing and close ally of the former CEO. He was appointed to his first job with the League of Ireland by him and would have had to have received a recommendation to land the Uefa job. At that time, he described Delaney as “an inspiration to work with”. He went on the describe Delaney as the man “who managed to make the association fit for purpose”.

Five years later, he returned to speak as a guest at the association’s 2017 AGM. Despite widespread reports of financial problems at the association and complaints that those who criticised Delaney’s leadership or questioned the standards of governance in place at the association were effectively ostracised with their clubs or leagues paying the price for them breaking ranks, he lavished praise on the way the association was being run.

It is, in the circumstances, easy to see why the existing board might see his arrival as welcome but it is hard to imagine that Sport Ireland or the Department of Sport would feel reassured that somebody so close to the previous leadership might suddenly be put forward as having a key role to play in the solution.

The sense among those who have consistently sought to achieve reform over a prolonged period of time, however, is that the board will take the position that he is simply Uefa’s man for the job.

At a time when the Federation is about to be bankrolling Abbotstown, they fear, that will be enough for the situation to be presented as a fait accompli.