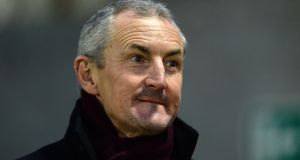 Cork City manager John Caulfield: “We want to get back to winning ways and finish the season on a high before the cup final.” Photograph: Eóin Noonan/Sportsfile

Having seen his side beaten in Inchicore on Monday night, Cork City manager John Caulfield says he is now looking beyond the end of the league season and to the cup final as he weighs up this evening’s return game against the Dubliners.

Another defeat for Cork would mean Dundalk retaining their title even before Sunday evening’s home game with Bohemians. But one way or the other, it is almost unthinkable that Stephen Kenny’s side will not retain their title and City, it seems, will start their preparations now for the next big showdown between the two sides, at the Aviva Stadium.

“Monday was disappointing and we know we didn’t play as well as we can,” says the Cork manager, who has pretty much the same squad to choose from. “We want to get back to winning ways and finish the season on a high before the cup final. Tomorrow night is an opportunity for us to give a lot of the lads a game.

“I expect a response from the players coming into the team. It is our last home Friday night game of the season, and our attendances have been very good in general this season, so we are hoping for a good crowd tomorrow night and good performance to send them home happy.”

Towards the other end of the table, Shane Keegan still insists that his Wexford Youths have everything to play for as they welcome Finn Harps to Ferrycarrig Park. The hosts trail their rivals by six points but have a game in hand and if they can win this evening then a win in either Cork or Sligo could potentially get Wexford out of the play-off position.

“We might still be relying on Bohemians to do us a favour up at Harps next week but I wouldn’t entirely rule that out,” says Keegan who is again without the injured Gary Delaney.

“But none of it will be of any importance if we don’t win this game so we’ll give that a go and it doesn’t come off we still have a chance of staying up through the play-offs.”

Sligo Rovers, like St Patrick’s Athletic, could notionally still nip in ahead of Shamrock Rovers for fourth place and a spot in Europe for next year but it really doesn’t look at all likely in either case.

A point at home to Bray tonight in Tallaght, where they will be without Gary Shaw or Dave Webster (both suspended) but have Patrick Cregg back would all but make things certain while a win will ensure Europa League qualification.

Derry are already in and can wrap up a third place finish that few would have tipped them for at the start of the campaign by beating a Sligo side that will be missing amongst others, Raffaele Cretaro due to suspension.