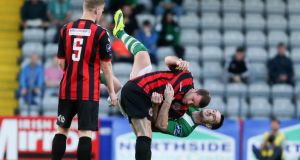 Bohemians 0 Bray Wanderers 1 If Bohemians’ early league form had them shaping up to be this season’s surprise package, they now look increasingly likely to be eclipsed in the race for that title as they bowed out of the FAI Cup to a Bray side that somehow seems to be thriving amid all the chaos.

It wasn’t pretty from Mick Cooke’s men but it was certainly spirited stuff against a home side that dominated possession but barely managed a serious shot on target during the 86 minutes they were chasing the game.

Late on, former Bray star Jason Byrne fluffed the sort of chance he has powered home countless times down the years.

He was put through between two defenders but fired his short straight at Peter Cherrie when there was an awful lot of goal to aim at. Barely a minute later, though, another of the game’s substitutes, Gareth McDonagh, missed an open goal from a tight angle at the other end so it wasn’t as if things couldn’t have been worse by the end for the locals.

The margin of defeat scarcely matters, though, and for the hosts losing by one made it all the more painful as the goal that gave Bray their win was a controversial affair.

Peter McGlynn’s misdirected cross from the right appeared to catch Dean Delany slightly unawares at his near post. The goalkeeper got across but then dropped the ball which bounced off the upright back into his possession but the referee’s assistant adjudged the ball had crossed the line.

Bray began to celebrate, the locals to protest but referee Graham Kelly pointed to the centre spot, prompting a stream of abuse from the stand that continued though most of the night and as he left the pitch at the end after the final whistle.

A couple of the calls made by Kelly in the period that followed did little to help his cause with the home support and the atmosphere at times was reminiscent of those wrestling matches that used to be shown on Saturday afternoons on ITV with the Corkman cast in the role of villain.

Not that he was entirely alone in the role. The game was pretty feisty at times too with a few of the challenges suggesting that perhaps some scores were being settled from Monday night at the Carlisle Grounds where Bray had also won.

Dave Scully certainly threw himself about a bit and by the time he was shown a yellow for a challenge on Lorcan Fitzgerald after 56 minutes there were a fair few of his former club’s supporters who felt he should have been seeing red.

In the end, he was actually carried off, having gone down, and stayed there, deep inside his own team’s area as they defended a free late on.

For all the niggle, there was also a fair measure of gamesmanship from the two sides but the disjointed nature of it all certainly suited Bray, with their lead to defend, much better.

Bohemians could only get going in fits and starts and never really carved out chances in the way they would have wanted. BOHEMIANS: Delany; Murphy, Prendergast, Best (Moore, 87 mins), Fitzgerald; Mulcahy, Lopes; Kavanagh, Buckley, Evans; Akinade.