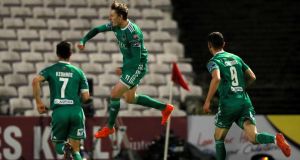 After what have been a rough few weeks for Cork City, Kieran Sadlier kept the southerners’ season alive for at least another 10 days with a late spot kick that left the locals outraged at referee Rob Rogers and the travelling support relieved to see their side take this cup semi-final to a replay next Monday.

Ultimately, it looked like the right decision but about the only entirely clear cut thing about the incident was the conviction with which Sadlier put the spot kick away.

Darragh Leahy was the one it was given against with the Bohemians left back penalised for dangerous play after connecting with Conor McCarthy while straining to get to the ball ahead of the City substitute. Rogers, or more precisely one of his assistants, felt the defender’s foot was high and the challenge reckless and there was no question about either the connection or the fact that the City player was hurt, only about whether he himself might have contributed to the incident by being later with his attempt to play the ball than his opponent.

“Maybe it was a difficult decision to make but, for me, it looked like Darragh won the ball,” said Bohemians boss Keith Long afterwards. “The action is to the ball and Darragh makes a clear connection with the ball.”

John Caulfield, predictably enough, saw it differently, insisting simply that “McCarthy made a great run,” but had been “taken down.”

There was less disagreement between the pair over the wider course of a game that Bohemians looked to be on course to win after a Dinny Corcoran goal midway through a second half that the home side had much the better of.

“It was poor in the first half but we were a lot better in the second and got down their right side quite a few times,” said Long. “That’s where the goal came from. They showed a bit of resilience to come back from it but they got a bit of help from the officials.”

Caulfield saw it more as a display of character by players who knew they needed to halt their recent slide here. “You have to give the lads enormous credit,” he said despite acknowledging they had not played well. “It hasn’t been an easy three or four weeks but they stuck at it and we got the penalty. It would have been really easy for the lads to lie down in the last 10 or 15 minutes and say, ‘well, it wasn’t our day,’ but they kept going.

“It was hell for leather through the last few minutes and possibly Graham (Cummins) might have won it for us with a header but we’re happy to take this back to what will be a full house in Turner’s Cross next week.”

It is hard to imagine how the hosts would have taken actually losing and in the chaotic closing seconds most of those in the main stand were frantically demanding a penalty of their own, claiming Mark McNulty had impeded Corcoran under a high ball.

Overall, though, they will travel to Cork with some confidence that they still beat their rivals and prevent this year’s being a fourth straight final between City and Dundalk.

“We can’t feel sorry for ourselves, we are still one game away from a cup final at the Aviva,” said Long. “It’s hard to move on from the penalty decision but the important thing now is that we are not out, we’ve got another bit of the cherry next Monday.”

City will surely be better than they were for lengthy stretches here. Shane Supple had just one save of note to make and for all the set pieces they had around their opponent’ area, especially in the first half, Cork rarely posed a serious threat.

Their hosts did after the break with a couple of whipped in frees causing a bit of a commotion. There was a touch of that about Corcoran’s goal too although first and foremost, the low Kevin Devaney cross that teed it up should have been defended far more effectively at the near post.

Caulfield will hope that his side with be stronger by next week with the City boss suggesting had played here despite ongoing fitness issues. Steven Beattie faces a race to recover from a hamstring problem that forced him off but the holders will at least have their manager in the dugout with his part in the row at half-time in the Dundalk game earning him a ban of just one game which will be served by the time these two meet again.