Bohemians see off Rovers to finish home season on high 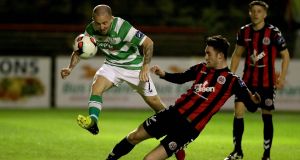 A first-half goal from Roberto Lopes was the difference at Dalymount Park as Bohemians claimed the bragging rights over 10-man Shamrock Rovers in a tense Airtricity League Premier Division clash.

This latest Dublin Derby between the two sides was the final home game of 2016 for Bohs, and despite coming under some pressure from their long-standing rivals in the latter stages, they were full value for their victory.

Rovers had come from 2-0 behind to secure a draw with Derry City in their most recent league encounter on September 27th and striker Gary Shaw was marginally off-target with a powerful effort from distance during the early moments of play.

However, the Gypsies were eager to make amends for their 4-0 defeat to the Tallaght men at the same venue in April, and they deservedly took the lead in the 15th minute. A corner by Lorcan Fitzgerald was delivered into the path of impressive Bohs centre half Lopes, whose bullet header flew past Barry Murphy in the Rovers goal.

This was a massive confidence boost for Keith Long’s charges after suffering a 2-1 reversal to Bray Wanderers last Friday week and Keith Buckley was close to doubling their advantage on the half-hour mark.

His attempted lob of the advancing Murphy just cleared the post, but although 2013 All-Ireland SFC winner Shane Supple collected a low drive from Shaw in the 38th minute, Bohs brought a one-goal cushion into the interval.

Following a disappointing first half from their point of view, Rovers boss Sami Ristila was seeking an improvement from his side after the restart. They certainly increased their energy levels during the third quarter, but with Bohs’ back four all in fine form, Supple remained largely untroubled.

Skipper Patrick Cregg was the fifth Rovers player to be booked by referee Paul Tuite on 55 minutes, and he subsequently received his marching orders 11 minutes later when he was given a second yellow-card for a dive inside the Bohs area.

The hosts’ numerical supremacy placed them in pole position for their 12th league win of the campaign, but with Rovers continuing to enjoy some good spells of possession, it was by no means a foregone conclusion.

Yet, despite seeing a Shaw header marginally missing the target deep into second-half stoppage-time, Bohs held out to claim all three points.

Finn Harps took a giant step towards Premier Division survival as they recorded their first league success in three months by overcoming Bray Wanderers in an open contest at Finn Park.

Harps began positively with the attack-minded Houston heading just over early on while Ryan Curran saw a goal-bound effort blocked on the line by Conor Kenna.

Harps took the lead on 11 minutes when Adam Hanlon whipped in a free from the left and Houston rose in a crowded area to head home from close range. It was Harps’ first home goal since Houston’s winner against Galway on July 8th.

But Bray, who had scored 13 goals while conceding just three in their past five games, almost drew level on 18 minutes when Hugh Douglas was denied by an acrobatic save from Ciarán Gallagher.

Curran saw a speculative effort hit the woodwork early in the second half before Houston connected with a Keith Cowan flick to steer in Harps’ second goal on 67 minutes.

Bray pulled one back on 74 minutes when Dean Kelly capitalised on a defensive mix-up to set up an exciting finish that saw having a late penalty plea turned down.

As he did when the sides met at the same venue in April, Conan Byrne scored twice as St Patrick’s took out their FAI Cup frustration on hapless Wexford Youths at Richmond Park.

Starting purposefully, the Saints created a host of chances before deservedly taking the lead on 20 minutes as they cruised into a 3-0 half-time lead.

Byrne and Christy Fagan were among those initial opportunities before the former made no mistake in breaking the deadlock, calmly placing the ball past Youths goalkeeper Graham Doyle from Graham Kelly’s through pass.

Frantic defending by Youths prevented a second goal on 25 minutes as Billy Dennehy’s shot was blocked away after Fagan all too easily found him in space.

And the chances just kept coming for the home side.

Fagan shot wide on the turn on the half hour before making amends within two minutes, finishing off a move involving Ian Bermingham and Jamie McGrath to rifle past Doyle.

Youths defender Lee Chin then brought down Kelly in conceding a penalty within a further two minutes with Byrne scoring confidently from the spot.

Though Youths were better on the resumption, St Pat’s soon regained control, with Doyle getting down well to push McGrath’s low drive round a post on 65 minutes.

Kelly then got St Pat’s’ fourth goal on 79 minutes, bouncing a downward header past Doyle from Bermingham’s left flank cross.