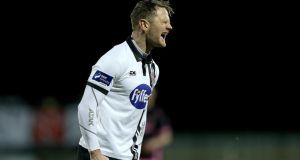 Ciaran Kilduff deprived Wexford Youths of a first Premier Division point with a late winner at Ferrycarrig Park to keep the champions top of the table.

Value for David McMillan’s first half lead, Dundalk struggled to impose their game on Youths in the second.

And Shane Keegan’s newcomers grew in confidence to deservedly level on 81 minutes.

Dundalk failed to deal with Paul Murphy’s corner on the left and defender Stephen Last beat Gary Rogers with a firm header.

Dane Massey’s cross from the left picked out substitute Kilduff whose header Doyle allowed to squirm under him and over the line.

That was harsh luck on Doyle as he’d kept Dundalk out in the first half.

The 37-year-old custodian did well to palm a long-range free kick from John Mountney round a post on 25 minutes.

And Doyle was there again with the save of the first half six minutes later, getting a strong hand to an impressive 30-yard drive from Horgan.

Youths relieved the pressure with their most incisive move of the half as Murphy set up strike partner Danny Furlong to curl a shot wide.

But the pressure told back at the other end on 34 minutes when Dundalk deservedly took the lead.

Mountney was the instigator on the right as his deep cross found McMillan at the back post for the striker to score his first goal of the season with a downward header.

Youths added some impetus to their game on the resumption with Furlong heading over the top from Danny Ledwith’s free kick eight minutes in.

Dundalk then escaped when defender Brian Gartland and keeper Gary Rogers got in each other’s way in trying to deal with a Murphy free kick which they were happy to see fly out for a corner.

Shamrock Rovers were forced to battle hard to overcome a resolute Finn Harps side in a stop and start encounter in Ballybofey.

Rovers had the better of the opening exchanges with Harps goalkeeper Richard Brush being forced into making a number of saves.

A serious of stoppages for injuries disrupted the flow of the game after the break but Rovers almost snatched an unlikely lead on 57 minutes when a speculative Gary McCabe effort from long range just dipped over the bar with Brush watching anxiously.

Rovers then had a let-off after Simon Madden, who was already booked, was involved in a tangle that left David Scully on the ground but referee Neil Doyle refrained from producing a red card.

The Hoops came to Ballybofey knowing that anything less than a win would represent points dropped in their title quest.

The visitors finally made the breakthrough courtesy of a 68th minute penalty from McCabe after Brush took down Gary North in the box.

Michael Drennan then had a goal disallowed for Rovers due to an offside decision.

Harps pushed hard in the closing stages with six minutes of stoppage time adding to the drama but Rovers held on.

This result maintains Rovers 100% record even if they have yet to really sparkle.

From the moment Beattie opened the scoring in the third minute, the game carried an air of inevitability, and so it proved. The hosts led 3-0 at half-time and might have won by even more, but they can be happy with this response to their loss to Derry City at the weekend.

They made five changes, and two of those brought in were involved in the opener, Colin Healy’s corner punched by Paul Skinner straight to Beattie, who half-volleyed home.

The second came on 10 minutes as Kenny Browne’s good ball set Kevin O’Connor away and he unselfishly squared for Seán Maguire. Other chances followed, but it wasn’t until first-half injury-time that they got a third, Danny Morrissey converting the rebound after Beattie had hit the post.

Morrissey provided the assist for the fourth on 52, chesting down Karl Sheppard’s cross so Beattie could finish, and then, midway through the half, Sheppard rattled the crossbar from distance before Beattie turned the ball home to complete his hat-trick.

With no end to the flow of City attacks, they always looked like getting another and the sixth arrived late on, Morrissey getting his second.

Galway United dropped points for the first time this season, after a 1-1 draw with Connacht rivals Sligo Rovers.

Ruairi Keating scored against his former team to earn Tommy Dunne’s side a share of the spoils, but they will feel they could have claimed all three points, especially as the home side were reduced to ten men late on.

Sligo had a dream start and got their first goal of this year’s campaign inside 60 seconds, as Liam Martin’s effort from the edge of the box looked straightforward for Conor Winn in the Galway goal, but somehow squirmed under him and into the net.

Galway fans travelled in good numbers and were left in shock by the early setback, but they will have been pleased with their side’s response, as Rovers keeper Micheal Schlingermann had to pull off two excellent saves before half-time, the first from a curling Ryan Connolly effort, and then a brilliant stop at the feet of Keating.

The striker was not to be denied twice though, and he got his goal nine minutes into the second half, after pouncing on the loose ball when the hosts failed to clear a free-kick.

But Rovers held on despite having Phil Roberts sent-off on a straight red card in the closing stages - the team’s third red card already this season.

Peter Cherrie made a fine save down low. But McNamee gathered and dinked a cross for Barry to steer in a close range header.

City went close to doubling that lead four minutes before the interval.

McNamee intercepted Paul Finnegan’s intended pass and burst forward. He played a reverse ball across the edge of the box for the breaking Patterson who was thwarted by Cherrie’s leg block.

But the Candystripes striker did make it 2-0 with 19 minutes remaining.

Midfielder Harry Monaghan muscled into the penalty area and with a clever turn, rolled the ball to Patterson who claimed his second goal of the campaign with a low finish from 15-yards.

1 Monica Seles: The warrior queen who could have been the best ever
2 The Best of Times: Ireland’s Golden Generation make Grand Slam history in 2009
3 Welcome to Iten in Kenya – home of champions and cheats
4 World Athletics freezes out Russian athletes after $5m fine goes unpaid
5 Martina Navratilova: A leader in her time, and for ours
Real news has value SUBSCRIBE