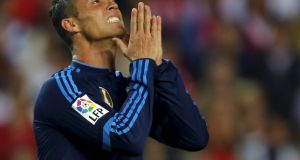 Real Madrid’s Cristiano Ronaldo looks despondent as his side slumped to a defeat against Sevilla on Sunday night. Photo: Denis Doyle/Getty Images

A flash of brilliance from Neymar helped Barcelona pull three points clear at the top of the Primera Division on Sunday.

The Brazilian striker had already put Barcelona on their way to a 3-0 home win over Villarreal with the opening goal on the hour mark, which was followed by a Luis Suarez penalty 10 minutes later.

However, the match will be remembered mainly for the individual skill that brought Neymar his second goal and Barcelona their third in the 85th minute, when he collected the ball from Suarez, fashioned a clever chip over bamboozled marker Jaume Costa and volleyed low into the net.

Real Madrid will head into El Clasico on November 21 in arrears of their great rivals, after sliding to a disappointing 3-2 defeat away to Sevilla — their first loss under manager Rafael Benitez.

The visitors took the lead through a spectacular overhead kick from former Sevilla player Sergio Ramos after 22 minutes, but Ciro Immobile scored his first goal for the Andalusians to level 10 minutes before half-time.

Sevilla took the lead through Ever Banega after the break and increased their advantage thanks to substitute Fernando Llorente, with Madrid’s late second goal coming from the fit-again James Rodriguez on his return from a two-month lay-off.

Sevilla climbed to 10th place with their win and Atletico Madrid moved up to third place, now just a point behind Real Madrid, after a 1-0 home win over Sporting Gijon, with Antoine Griezmann heading the only goal in second-half stoppage time.

Athletic Bilbao stretched their winning run across all competitions to five matches with a 2-1 home victory against Espanyol — and they had a goal to rival Neymar’s special strike.

Inaki Williams netted his fifth goal in three games in spectacular fashion by flicking the ball over Enzo Roco and firing a volley into the top left corner after just eight minutes.

Hernan Perez levelled for Espanyol early in the second period, but Raul Garcia’s header 26 minutes from time won it for Athletic.

1 Gordon D’Arcy: There’s more to Saracens’ success than money
2 Seán Moran: Total disregard for schools as GAA votes one way and acts in another
3 10-man Arsenal show their heart to rescue a point at Chelsea
4 Solskjær can’t guarantee Rashford will play again this season
5 David McCann eager to begin Ireland’s U-20 Six Nations defence
Real news has value SUBSCRIBE
Crossword Get access to over 6,000 interactive crosswords