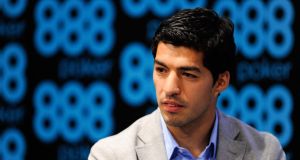 Luis Suarez has lost a sponsorship deal with 888poker after receiving a four-month ban from all football-related activity for biting Italy’s Giorgio Chiellini. He is pictured here in May when he was unveiled as the company’s ambassador. Photograph: David Ramos/Getty Images

Liverpool are working their way through the legal minefield of striker Luis Suarez’s four-month ban for biting Italy defender Giorgio Chiellini but are still a long way from even considering launching a challenge to Fifa.

The club have dismissed claims by Suarez’s lawyer Alejandro Balbi that their representatives are meeting with him and the player’s agent Pere Guardiola in Barcelona today.

Chief executive Ian Ayre and Guardiola have a good relationship and there has always been an open line of communication between the pair and Press Association Sport understands Ayre has been in regular contact with principal owner John Henry from the moment the Suarez incident happened on Tuesday evening.

Whether the meeting in Barcelona ultimately takes place or not — it is understood Balbi was scheduled to accompany Suarez on a flight back to Montevideo following his expulsion from the World Cup — Liverpool are still trying to assimilate all the details and implications of the punishment handed down to the Uruguay international.

Having seen no paperwork from the disciplinary hearing the club cannot yet formulate any sort of response and suggestions they are already considering a lawsuit against Fifa are wide of the mark.

Liverpool would be reluctant to take on world football’s governing body and they are also keen to avoid becoming embroiled in a long, drawn-out saga through the Court of Arbitration of Sport (CAS), which would seem their most feasible course of redress.

However, no decisions have been made on how to progress as officials are still trying to ascertain the minutiae of the case in terms of things like Suarez’s training regime. The Fifa ruling states he cannot be involved in any football-related activity for the duration of his suspension, which includes entering any stadia.

The Uruguayan federation (AUF) — for whom Suarez is banned from playing for nine internationals — has already announced its plan to challenge the ruling.

“We are preparing our appeal now, we have three days to do it,” said president Wilmar Valdez. “It’s an extremely excessive punishment, there was not enough evidence and I have seen more aggressive incidents recently.

“It’s feels like Uruguay has been thrown out of the World Cup. We all know what Suarez means to Uruguay and to football around the world — not having Suarez would be a loss to any team.”

Suarez will miss at least 12 club games — nine Premier League matches plus three Champions League games, and potentially a Capital One Cup match too — before a return at the end of October.

The ban on football-related activity does not extend to transfers and both Barcelona and Real Madrid have reportedly not been put off by the latest development in the player’s controversial career which is why Balbi’s announcement of a meeting in Spain’s second city piqued interest.

But Liverpool, having backed the striker to the hilt during his two previous misdemeanours with them — the eight-match ban for racially abusing Manchester United’s Patrice Evra and the 10-game suspension for biting Branislav Ivanovic — have no intention of selling a prize asset who was the Premier League’s leading scorer with 31 goals last season despite missing the first five games through suspension.

The financial implications are already being felt by Suarez as in addition to his fine of £66,000, betting website 888poker has dropped him as its ambassador.

“888poker signed Luis Suarez following a fantastic season for which his achievements were widely recognised,” said a company statement.

“Regrettably, following his actions during Uruguay’s World Cup match against Italy on Tuesday, 888poker has decided to terminate its relationship with Luis Suarez with immediate effect.”

Long-term sponsors adidas are taking a more considered approach. “adidas fully supports Fifa’s decision,” the sportswear giant said in a statement. “adidas certainly does not condone Luis Suarez’s recent behaviour and we will again be reminding him of the high standards we expect from our players.

“We will discuss all aspects of our future partnership directly with Suarez and his team following the World Cup.”