Ken Early: Neville may be first to replicate Fergie effect 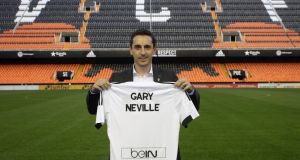 Valencia’s new coach Gary Neville poses with his jersey during his presentation at the Mestalla Stadium last week: the former Manchester United defender is the eighth member of United’s 1996-97 squad to be appointed as a head coach. Photograph: Heino Kalis/Reuters

“Gary has many attributes that suggest he will be successful in management,” Ferguson said. “His leadership skills are strong, he’s honest and he’s hard-working. He is not afraid of making big decisions, which is a vital skill when leading. I think he’ll do well . . .”

Ferguson’s own career since he left Manchester United has mainly been spent in passing on the accumulated wisdom of his 40-year management career in books, lectures, speeches and even a collaboration with a Harvard academic.

He’s become a corporate icon, an exemplar of managerial excellence. It’s curious, therefore, that of the vast pool of players who worked under Ferguson and experienced his methods first-hand, there are very few who went on to become outstanding managers.

Gordon Strachan and Alex McLeish have won titles in Scotland, Laurent Blanc won the league in France and Ole Gunnar Solskjaer won it in Norway, but the only Ferguson protegés who have won a trophy in English football are McLeish and Steve McClaren, who both won the League Cup.

The preferred term in football journalism to describe the great clubs is “dynasty”, but the word doesn’t seem fitting in the case of Ferguson’s empire, because to have a dynasty you need successors.

Lowe wrote that of the 27 players in that season’s Barcelona squad, 21 had worked as head coaches or sporting directors. Even the translator, Jose Mourinho, went on to become a managerial legend.

Compare this to the 25 players who saw action for Manchester United in the 1996-97 season. Neville is the eighth member of the squad to be appointed as a head coach. Of the others, only three – Roy Keane, Solskjaer and Ryan Giggs – have managed in the Premier League, and none has ever managed in the Champions League. Why did the school of Barcelona produce so many top coaches, while the school of Ferguson produced none?

The answer could be that at Barcelona the players were learning a style of playing, whereas Ferguson’s United was more a style of being. The Barcelona players learned a football credo instituted by Johan Cruyff – a set of ideas about how football should be played, ideas that could be learned, refined and passed on. Ferguson was always more statesman than technician. He never had a set style of play; he was never an ideologist like Cruyff or Louis van Gaal.

Instead, he excelled at the political and psychological elements of football management, which is why he ran a big club for 27 years, while Cruyff’s longest stint at one club was eight years and van Gaal’s six. As for the tactical and technical side, that’s why he employed guys like Carlos Queiroz and Rene Meulensteen.

The emphasis on the psycho-political is clear in Ferguson’s pompous book, Leading, which contains almost nothing about football as a sport. A chapter entitled “Transitions” is all about how to handle arriving at and leaving football clubs. It’s hard to imagine Guardiola writing a book like Leading. If he did, you can bet that the chapter titled “Transitions” would be about the transitions that happen on the pitch, from defence to attack and back again.

Only time will tell for sure, but you would expect that many of the players learning under Guardiola will one day be successful managers. People used to think that about Ferguson but because his management depended on his unique personality rather than any particular set of theoretical ideas, his style has proven devilishly difficult to reverse-engineer and replicate.

Neville, who has succeeded at everything he’s ever done, might be the first to pull off the trick. But today’s players also expect you to tell them something they didn’t know about the game. Neville says he has matured during his five years out of the game, running businesses, analysing, networking. He sounds as though he’s learning many of the political and corporate skills Ferguson writes about in his books. Hopefully he hasn’t forgotten that the only thing that really counts is the stuff that happens on the field.