Kelly and St Ledger to play in defence at Wembley 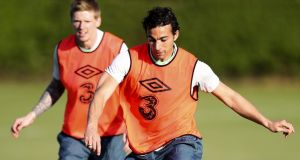 Stephen Kelly wil start at left back for the Republic of Ireland against England at Wembley. Photograph: Ben Hoskins/Getty Images

Stephen Kelly will start at left back and Seán St Ledger at centre back in the Republic of Ireland team to take on England in Wednesday night’s friendly international at Wembley.

Kelly gets the nod after Stoke City’s Marc Wilson was ruled out with injury, while St Ledger is named ahead of Darren O’Dea to partner John O’Shea. Séamus Coleman has been named at right back.

Ireland manager Giovanni Trapattoni has decided to stick with Jonathan Walters in a right-sides midfield position after some impressive performances, with Aiden McGeady starting on the left wing ahead of James McClean.

Glenn Whelan and James McCarthy will play in the centre of midfield, while skipper Robbie Keane will be partnered by Shane Long up front.

Keane takes over from Conor Sammon after missing the 2-2 draw with Austria in Dublin at the end of March and will lead the team on to the pitch less than 36 hours after his latest trans-Atlantic dash.

The 32-year-old striker will win his 124th senior international cap at Wembley having only landed in London from Los Angles this morning.

Meanwhile, England manager Roy Hodgson has confirmed that Ashley Cole will on the occasion of his 100th cap, despite initial confusion over the Chelsea defender’s new role at today’s announcement.

Hodgson told Sky Sports News: “Frank’s always been the captain in Steve’s absence. I appointed him when I started over a year ago.

“But in actual fact tomorrow, Frank and I have discussed this and Frank’s happy for Ashley to lead the team onto the field in celebration of his 100th cap, which he’ll receive tomorrow.

“It’s actually his 102nd appearance. Frank and I are happy that he will lead the team out there but Frank still remains the captain of the team.”

Hodgson was later quizzed further and stated that Cole, and not Lampard, would captain the team throughout.