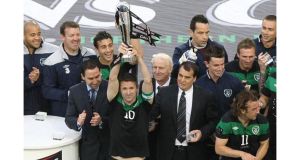 The striker grabbed the only goal of the game and hands the Republic the ideal boost ahead of their Euro 2012 qualifier away to Macedonia on Saturday.

James Forrest was handed his debut, while Phil Bardsley, Grant Hanley and Barry Robson also started against the Irish.

“The most important thing, like in any international game, is to get a win and get the confidence up, all you want to do is come into a camp and get that confidence, two wins in a week will do that,” said Keane afterwards.

“It is a great week for us, clean sheets all week and great build up for Macedonia, a great boost for the camp. It was nice to get a result and we are delighted to be able to celebrate something like this in our home stadium,” he said.

Scotland created the best of the chances early on. Adam raced onto a Scott Brown pass before unleashing a powerful shot that dipped just over.

Bardsley then tried his luck with an effort from distance that was touched onto the crossbar by goalkeeper Shay Given.

But it was the hosts who surged into the lead after 24 minutes when Keane collected from Paul McShane on the halfway line before bearing down on goal and slotting home from the edge of the area past goalkeeper Allan McGregor, who should have done better.

Scotland could have been back on level terms within seconds when Robson slotted into the path of Kenny Miller but the striker just failed to connect at full-stretch in front of goal and Given was able to collect.

There was another chance to pile on the pressure when O’Dea fouled Robson just outside the box and Adam stepped up for the free-kick but his swerving effort was comfortably gathered by Given.

Brown and Hunt then squared up following a rash challenge from the Scotland midfielder but the clash proved to be nothing more than a minor altercation.

Ireland should have doubled their lead shortly after the restart when Hunt’s free-kick found Simon Cox in plenty of space and he should have found the target but fired across the face of goal and wide instead.

The hosts were threatening again when Keane was tripped by Adam and Lawrence played a short free-kick to Keith Andrews but he blasted over.

Adam was then booked before being replaced by Barry Bannan after 62 minutes, while the Republic swapped Lawrence for Seamus Coleman as both sides made their first change of the night.

Forrest could have marked his debut with a goal — and sparked a Scotland comeback — when he met Robson’s cross from the right, only to connect awkwardly and fire wide of the upright from close range.

Miller clearly felt he should have been given a penalty after being held back in the box by Hunt but succeeded only in earning himself a yellow card after racing furiously across the pitch to confront Welsh referee Mark Whitby.

Scotland continued to push for a leveller and Steven Naismith fired wide before Miller’s shot under pressure from McShane was clawed to safety by Given.

Keane’s hopes of grabbing his 50th international goal in this match were dashed when he was replaced by Keith Treacy with seven minutes to go.

Miller then squandered a great opportunity when he shrugged off Stephen Kelly only to shoot wide when it looked so much easier to hit the target.

1 Gerry Thornley: Home and away Six Nations could be its ruination
2 Aviva 10-year ticket holders seek clarity over payment
3 Darcy says enforced break could end up being a positive for Dublin
4 Record numbers watch Woods v Mickelson charity match
5 Coming fourth in the Olympics didn’t change this fearless quartet, time did
Real news has value SUBSCRIBE
Crossword Get access to over 6,000 interactive crosswords