Round-up: Sadlier his hat-trick in Cork rout; Sligo Rovers and St Pats finish on a high 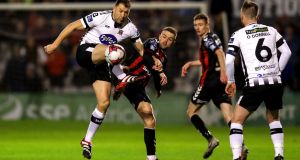 Bohemians and Dundalk could not be separated, with the sides playing out a 1-1 draw in what was an exciting affair in Dalymount Park.

It was Dinny Corcoran who opened the scoring for Bohemians with the set-up coming from Keith Buckley and Corcoran made no mistake with the finish to put his side ahead.

Bohemians had further chances to extend the lead before the break but a series of superb save from Gary Rogers kept the scoreline at 1-0 at the interval.

Keith Long’s side were dominant after the break but could not find that elusive second goal and were punished when Daniel Cleary found the back of the net with a header after an excellent corner from Michael Duffy.

Dundalk had a chance late on but Patrick McEleney blazed over from close range and referee Robert Hennessy called a half on procedures shortly after.

The Lilywhites head on to the FAI Cup final on Sunday week against Cork City and their fans were delighted to see skipper Stephen O’Donnell back in action for the first time since breaking his leg in May.

It was all very straightforward as second-placed Cork City ensured they finished on 77 points by seeing off Bray Wanderers at Turner’s Cross.

Having dominated, the lead for the Rebel Army came in the 20th minute, as Barry McNamee sent over a great cross from the right, allowing Kieran Sadlier a free header beyond Evan Moran in the Bray goal. Just before the half-hour, Bray almost conjured an equaliser as Seán Harding’s free-kick went through to Conor Kenna but he couldn’t get enough on the ball and Mark McNulty saved.

After that left-off, City went 2-0 ahead as Shane Griffin came in from the left, allowing Gearóid Morrissey to fire a shot home, and Sadlier’s low effort from long distance extended the lead on 34 minutes.

Graham Cummins went close again with an overhead kick and a header which Moran saved but shortly before half-time a mix-up between the goalkeeper and his defence following a Griffin cross allowed McNamee to nip in and get another goal.

Sadlier had his hat-trick within two minutes of the restart, though Bray’s six travelling supporters did have something to cheer when Jake Ellis netted straight after that.

Cummins had a header come back off the bar after that while Jake Kelly might have got a second for Bray, but the outcome was decided well before the end.

Sligo Rovers impressed their new boss Liam Buckley with a fine 2-0 defeat of Shamrock Rovers thanks to goals from Mikey Drennan and John Mahon.

In a game that was meaningless in terms of the result, with Sligo safe from relegation and Rovers already qualified for Europe, the visitors dominated the first half.

There were excellent chances for Gary Shaw, Dan Carr and Dylan Watts – Watts hitting the crossbar from long-range – with the home side not threatening until Mikey Drennan’s acrobatic finish put them 1-0 up in the 38th minute.

Sligo, who were the better team after the break , made it 2-0 after 10 minutes of the second half through John Mahon’s close-range headed goal from an Adam Wixted free-kick delivery.

Conan Byrne captained St Patrick’s Athletic in his last match for the club after six years at Richmond Park as they ended the season with this facile win over Derry City.

Watching from the stand, new manager Harry Kenny will have been pleased with what he saw as St Pat’s had the game won by half-time.

An eighth defeat in nine games sees Derry slump to finish third bottom of the table.

The opening goal arrived in spectacular fashion on 29 minutes as Conor Clifford struck a right-footed drive from distance to the top corner for a stunning first goal for the club.

Byrne’s sublime through pass then put James Doona in to take the ball around goalkeeper Eric Grimes and slide it to the net on 38 minutes.

Two minutes later Clifford clipped a diagonal ball to the far post for central defender Kevin Toner to head to the net.

St Pat’s scored twice more early in the second half with Byrne providing both assists.

Byrne’s ball found Keegan at the back stick to nod in unchallenged on 54 minutes.

Three minutes later, Byrne again put over the cross for Doona to chest the ball down and volley to the net.