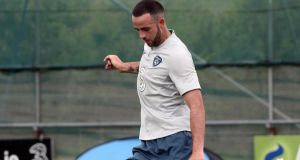 John O’Shea is to sit out tomorrow’s friendly against Georgia according to Marco Tardelli who says the Sunderland defender will be rested for a game which forms just the latest instalment of the Republic of Ireland’s build-up to a home qualifier next week against the side ranked 51st of 53 in Europe. If it really is preparation that paves the way to victory then the part-timers should be afraid on this occasion . . . very afraid.

Robbie Brady is also out of the match, having aggravated a groin strain in training and left the squad while David Forde will rest a sore knee before returning on Friday, but Giovanni Trapattoni still has plenty of options to choose from as he prepares to name his starting 11 today.

The 74-year-old has suggested that he will give some of his squad’s more peripheral members a run-out but there were few clues yesterday as to who the beneficiaries might be, with Tardelli admitting that the shirts for the training game had been given almost at random.

Prove his fitness
Marc Wilson, who has been struggling with a calf strain, is one of the regulars who is likely to feature at some point so as to prove his fitness for Friday. That, though, will mark the end of his season as he explained yesterday.

“I’ll not be around for the Spain game,” he said. “I’m having my plate [inserted when he broke his leg last October] taken out of my leg. I’m booked in on the 10th to have it removed because I think that’s where a lot of my problems are coming from so I’ll not be there.”

Keiren Westwood is set to start tomorrow while the likes of Paul McShane, Jeff Hendrick and Conor Sammon are all firmly in contention. Richard Keogh, David Meyler and Damien Delaney will also be hoping to be included although there is likely to be a backbone of more experienced internationals in there too, with James McCarthy and Shane Long (both suspended for Friday) or perhaps Robbie Keane, in what would be his record-equalling 125th appearance, among those who might be asked to provide a steadying influence.

On the face of it there will be nothing in particular to be learned from playing the Georgians although in a week that their under-19s qualified for this year’s European Championship thanks, amongst other things, to a 2-2 draw with England, and their under-17s won a game 13-1, it certainly seems that they are doing a few things right behind the scenes.

Youthful look
Under current boss Temuri Ketsbia, probably best remembered for his time with Newcastle United, there is a youthful look about the senior team too, with Spartak Moscow’s 20-year-old midfielder Jano Ananidze one of several talented youngsters who have been introduced over the last season or two.

Vitesse Arnhem skipper Guram Kashia admits the team’s style is defensive but that might be just as well on this occasion given that withdrawals since Ketsbia named his original squad have left him with just one striker.

Ketsbia’s appointment in 2009 seemed to spark a significant improvement in the fortunes of a side Ireland had beaten home and away (if, that is, you count Mainz where the game was moved by Fifa, a factor in Ireland offering this friendly in Dublin).

More recently, they have slipped back a bit but very few sides put more than a goal past them these days and when Spain went to Tbilisi last September it took them 86 minutes to manage one.

All of which may just play on the mind of Trapattoni as he weighs up how quickly the public opinion credits acquired in London might be lost again in the event of a poor performance or result.

James Lowe enjoying Leinster’s unbeaten run, the secret to TJ Reid’s longevity
Here is your handy guide to sport on television this week