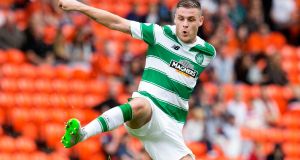 Inverness manager John Hughes is relishing the prospect of a potential reunion with striker Anthony Stokes after making a move for the Celtic player. Photograph: Jeff Holmes/PA

Inverness manager John Hughes believes he can get Anthony Stokes to Euro 2016 by giving him a “kick up the backside” should the out-of-favour Celtic striker join the Highland club.

Caley Thistle have enquired about taking the Republic of Ireland international on loan and Hughes, who has worked with Stokes twice before, has urged him to ignore interest from elsewhere.

Stokes is free to leave Parkhead on loan and having got the best out of him at Falkirk and Hibernian, Hughes wants a third crack at managing the 27-year-old.

Speaking after his side’s goalless draw with fourth-tier Stirling in the William Hill Scottish Cup fourth round, Hughes said: “We have made contact with Celtic and I think ourselves and Celtic believe it’s the best thing for him to work with me again.

“I will keep my eye on him in Inverness and I can get him going again.

“That’s what we are all thinking is best for him. But I think he might be thinking about his options now he can go on loan – no Stokesy, the best place is to be playing and scoring goals in the Premiership.

“It could get him into the Republic of Ireland’s European Championship squad. He needs a kick up the backside. He needs to be playing football and that’s what we are offering him.”

The Inverness manager could have done with Stokes on Saturday as the Scottish Cup holders suffered a frustrating 0-0 draw at Stirling.

1 Gordon D’Arcy: Change has to happen before Ireland's trip to Paris
2 Zinedine Zidane tests perfect record against old friend Guardiola
3 Out of Bounds: Patrick Reed helping make the ‘C’ word less taboo
4 Kevin Seaward: ‘The first time I wore the Vaporflys, I hated them’
5 Gerry Thornley: Wild reactions to this Ireland team as fickle as the wind
Real news has value SUBSCRIBE
Crossword Get access to over 6,000 interactive crosswords