World Cup Weekend: A downpour of goals in a deluge of games

With his local pizzeria on speed dial, Ian Power embarked on a World Cup marathon 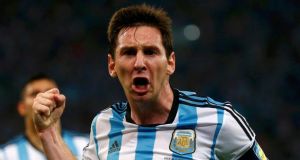 ‘Messi’s strike raised me from the couch and I cracked a window attempting the ‘Maradona Seven’ with an empty beer can.’

How the Netherlands sizzled last night! Early days, but Van Gaal is as canny as a sack of Dutch Gold and his team, in yesterday’s free scoring form, should make it to July.

Anyway, good afternoon. Stuck to the couch for nine hours with a near fatal dose of caffeine—Japan v Ivory Coast kicks off at 2am Irish time—and budget pilsner to chug, I’m hoping some decent football might offset the saddle sores.

To Group C, where Colombia face Greece at 5pm.

Poor Nikolas Manolas, 23 today. The centre back couldn’t turn Armero’s effort round the post and watched the ball squirt past Karnezis. No ‘anniversary bursary’ scoring bonus: the ball’s in the wrong net!

Pekerman’s charges have ceded the possession, daring Greece on. The phalanx isn’t designed to control the game and long balls result in little.

A late goal by Rodriguez, the star, polished the scoreline. By their high standard, Greece defended poorly. Japan and the Ivorians to come, they could be out by the matinée curtain.

Cripes. The Central Americans bite back and Uruguay—Suarez not yet fully fit—can’t muster the jaws to respond. Two goals in three minutes put Costa Rica in front, Joel Campbell clattering home the first before Duarte’s brave header set coach Jorge Luis Pinto—nicknamed ‘the explosive one’— and his bench alight. It may not be safe for England to go into Sao Paolo water next Thursday, Tabarez’s wounded side will be desperate.

The Arena Amazonas staff painted the grass green to hide raw portions from TV cameras. The surface is passable, but this is what happens when you let the Manaus Kickhams Junior 4ths train on the good pitch, lads. What’s ‘sideline cut’ in Portuguese, I wonder?

Thierry Henry provides an urbane foil in the BBC studio to Englishmen’s nerves. Roy has invested in Sterling futures through the middle and redeployed his Rooney fund wide left.

All even at the break, much bandied schemes to limit Pirlo haven’t materialised. If 2012 was the reference, England seem not to have grasped the answers.

Redtop back-page forecast: OUR LEFT WAZZA-N’T RIGHT. A sharp fixture to come Thursday next between England and Uruguay, it appears.

Japan and the Ivory Coast round out the day’s fixtures at 2am, giving me enough time to prepare some high-octane alertness potions. Let me Irish up that coffee for you!

Japan lead one-nil at the break, a belter from Honda just inside the Ivorian box. I dozed off near the end of the half before jolting awake as Ray Winstone growled and told me to ‘Go for it!’ I also have a sudden urge to buy a Vauxhall and vote Tory. You know you’re watching ITV when...

Two assists from Serge Aurey, Bony and Gervinho each heading past Kawashima, within two minutes set Ivory Coast on their way.

Fitting for a Japan game, the sun is rising outside and my eyelids are set to clamp shut. Bedtime, I’d reckon.

A packet of cream crackers for lunch before a quick jaunt to the offie for supplies. Full programme today with the Swiss taking on Ecuador in Group E at 5pm, before France Honduras at 8pm. The late kickoff is Argentina and Bosnia-Herzegovina in Group F, Messi’s opening salvo. Let’s get to it.

Alps versus Andes to determine the King of the Mountains, no holds barred. The Ecuadorians, unbeaten at home in Quito—2,800 metres above sea level—throughout qualifying, are describing their geography with parabolic balls from back to front. Verticality is the theme, Enner Valencia’s free header in the 22nd minute the difference. Switzerland, according to Fifa, are the sixth best team on the planet. At the moment I’d struggle to find six worse teams.

Richie’s inquest into the Ecuadorian goal is scathing, defending unacceptable at any level. Ronnie despairs for either side, whose big names have disappeared. Bill can’t even entertain the notion it might get worse.

A carbon copy header draws Switzerland level. No real quality until we’re into the 93rd minute, Seferovic clipping Mehmedi’s square ball into the roof of the Ecuador net.

I understand now that peaks can also be troughs. Alps win.

Forget your Sunday roast, I have the local pizza lads on speed-dial: jalapenos and pineapple with extra mozzarella. Why not?

Crunchy first half with Honduras down a goal and a man—Wilson Palacios earning two yellow cards.

Three points the only reward for winning a match this easy, Honduras tackled hard during the second half and ensured a few bruises by which to be remembered amongst Deschamps’ composed side.

Next: a first ever World Cup match for Bosnia-Herzegovina, in the Maracana, against Argentina.

As precedent goes, debutants Bosnia Herzegovina will hope to emulate northern neighbour Croatia, who came third in France ’98, their first World Cup. They also wouldn’t mind avoiding the treatment inflicted by Argentina on eastern neighbour Serbia (& Montenegro, then) in 2006, a game worth rehashing from time to time.

Messi’s strike raised me from the couch and I cracked a window attempting the ‘Maradona Seven’ with an empty beer can. More a ‘Maradona two-and-a-half’ honestly, it went left foot, right foot, left knee-cap, window-pane.

Ibisevic’s late nutmeg couldn’t inspire an unlikely comeback but Argentina, once Sabella made his halftime changes, were worthy winners.

No draws yet and a deluge of goals. Let it rain!

1 Trump endorsement by Jack Nicklaus leads to avalanche of dismay
2 England lay down marker for Ireland after bonus point win in Rome
3 World Handicap System: What is it? How does it work? Will my handicap change?
4 Dublin return from the dead to give Kilkenny a scare in Croke Park thriller
5 Galway expose Wexford’s lack of Plan B to reach Leinster final
Real news has value SUBSCRIBE
Crossword Get access to over 6,000 interactive crosswords