Why are the same fans not celebrating both Irish victories? 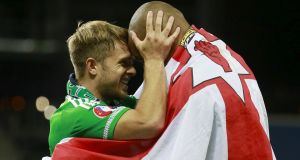 Like many matters in Northern Ireland, football allegiance is still quite firmly divided into two camps.

After last night’s results – the Republic of Ireland beating Germany to guarantee at least a play-off spot for the Euro 2016 finals, and Northern Ireland defeating Greece to qualify automatically – both sides have cause for celebration.

But the same fans are not celebrating both victories.

While there is significant cross-community support for the Republic of Ireland and Northern Ireland teams, their respective fans are largely drawn from one section of the community.

Traditionally, those in the North to identify as Irish, Catholics and nationalists support the Republic of Ireland, while those of a British, Protestant and unionist background support Northern Ireland.

Following Thursday’s wins you only have to look at the reaction on Twitter from Stormont’s DUP First Minister Peter Robinson and Sinn Fein deputy First Minister to get a flavour of where allegiances lie.

There is a long way to go before both teams are likely to receive equal support from both traditions in the North.

It may never happen, and the prospect of football operating on an all-island basis, like rugby, is a source of contention.

When The Irish Times visited the Shankill Road and Falls Road in Belfast on Friday afternoon the people of the city were not short of opinions.

Shankill Road shop owner Jackie Millar (59) was thrilled with the Northern Ireland result. “It’s all I have heard anyone talk about today,” he said. “My son and his friends pre-booked a holiday to France in June hoping this would happen.

“It’s unbelievable. Just brilliant. Us getting there is like us winning it. If Northern Ireland don’t do well and the Republic goes, I would support them and so would a lot of other people I know. The only confrontation would be if the two teams clashed.”

“It was an outstanding result,” he said. “Magic atmosphere. When they scored I lowered the TV and you could have heard the roar from Windsor Park. Northern Ireland is my team. I don’t follow the Republic. We are Northern Ireland.

“Protestants play for Northern Ireland and Catholics play for the Republic of Ireland, I don’t think there will be a united Ireland team. We like to have our own teams.

“Lots of Catholics support Northern Ireland and that is certainly the way it should be, as long as they stand for the Queen, that’s all we want to know.”

Butcher Alex Main (44) was thrilled with both of Thursday’s night’s results and for good reason. “I bet on Northern Ireland to win so I am happy,” he said. “I bet on the Republic to win too and in total I got £300 back. I wouldn’t support the Republic but I would have a bet on them. There might be an all-Ireland team on day, you never know.

“Some people from different communities support the other teams. I would love to go to France to support Northern Ireland.”

At the Ulster Souvenirs shop on the Shankill, David Reid said Northern Ireland fans have been busy buying flags, scarves and hats.

“It is a brilliant result,” he said. “We felt it all day leading up to the match and the good atmosphere got the players ready. It’s the first time in 30 years for them, I was born in 1986, it’s brilliant. Most Northern Ireland fans I know put a wee bet on for Northern Ireland and put a bet on Germany too.

Indeed, at Pat’s Barbers on the Falls Road there was not much love for team Northern Ireland.

Pat Hall explained he “wouldn’t watch Northern Ireland if they were playing live across the road”.

“Windsor Park is walking distance from here and I don’t know anybody who goes to it,” he said. “We have never been made feel welcome. They play the national anthem of another country. I would love an all-Ireland football team. It would bring people together.

“I don’t support the Northern Ireland team at all. People are excited about Ireland beating the world champions. I didn’t have the radio station on this morning because I couldn’t be annoyed listening about Northern Ireland. I follow Ireland in the rugby, boxing, hockey, I always support Ireland in any sport.”

“I would like to see an all-Ireland football team,” he said. “It’s not political why they don’t combine, it’s because they won’t get paid – two associations are making money. I would never support the Northern Ireland football team because I am not welcome in their stadium because of my religion. Neil Lennon got death threats so what chance to do you have as a supporter.

“On Twitter I saw singing ‘are you watching James McClean?’ They hate him and that was one of the milder things Northern Ireland fans were saying. They brought politics into it.”

Outside the Michael Davitt GAC bar on the Falls, Seán O’Neill (60) explained he would like football to operate on an all-island basis, like rugby and boxing.

“My son Seán plays for Crusaders and played for Northern Ireland up to under 21. He also played Gaelic for Antrim. He loves it. I would support the Republic of Ireland team more so than Northern Ireland.

“I am Irish and we just beat the world champions. I would love to see an all-Ireland football team. It might happen in a lot of years time but it’s too early for it now.”

Jim Morgan (51) agreed. “I am a Republic of Ireland fan,” he said. “Definitely not a Northern Ireland fan. The way they are, waving union jacks . . . we’re not Brits, so don’t support. It’s too sectarian, I wouldn’t feel comfortable at Windsor Park.”

“Supporting Northern Ireland is a birthright, especially growing up in the 80s during two World Cup final campaigns, but it shouldn’t be exclusive to any particular demographic,” he said.

“It’s our wee country, and it certainly doesn’t mean to say that supporting the Ireland rugby team, for example, or even the Republic of Ireland in football, is mutually exclusive.

“We ought to celebrate everything great and positive that is happening in sport in this island at the moment, and the vast majority do without exception.

“What isn’t acceptable, however is any hint of exclusion or unpleasant tribalism, which thankfully is a rare exception rather than the norm.”

1 ‘A radical departure’: Who are CVC and what are their plans for rugby?
2 Ken Early: Why international football is fading into obscurity
3 Colin Kaepernick’s exile is too fresh for NFL to speak out on US protests
4 Connell losing touch with club championship is real tragedy of Normal People
5 Michael Jordan speaks out against George Floyd killing in rare statement
Real news has value SUBSCRIBE
Crossword Get access to over 6,000 interactive crosswords