Uefa to stick with 24-team format in European Championships 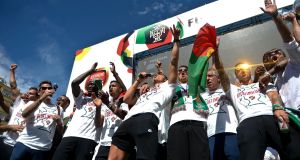 Portugal’s Cristiano Ronaldo and his teammates were welcomed home to Lisbon by thousands of supporters following their Euro 2016 final win over France. Photograph: Patricial De Melo/AFP/Getty

Uefa is set to stick with the 24-team European Championship format for the foreseeable future after what is seen to have been a successful tournament in France. The quality of the football was generally seen to be down over the course of the 51 games but with record revenues and attendances, it appears that the size and structure will be retained for 2024, the next staging for which changes could be made.

“People were anxious the format might not work but it has worked,” Euro 2016 tournament director Martin Kallen said in Paris yesterday. “We don’t know yet [about 2024] but at the moment it’s the format we’re looking at because it’s been very positive.”

Certainly it delivered financially which is, of course, a major priority for the organisers. TV revenues were up by a third to €1.93 billion with Uefa benefiting from not just the ongoing buoyancy of the rights market but also some knock-on effects of the expansion.

Sponsorship revenues will be significantly up too as companies paid a premium to be involved with an event that would directly involve almost half of Europe’s nations and almost all of its major markets.

There was also said to have been a large boost because the tournament was staged in one of the EU’s biggest economies while the addition of 20 more games has resulted in substantially greater ticket revenues.

“There are teams playing ultra-defensively but they do that well,” said Germany coach Joachim Löw. “The smaller nations like Albania or Wales are defensively very well schooled. They see their chance in that,”.

“The 16 teams was ideal,” he concluded. “It made for great matches from day one.”

The idea that Uefa would ever reverse the expansion was, he knows, far-fetched but prior to this tournament getting under way and during it, some of the organisation’s senior officials had actually floated the idea of a further enlargement to 32 for 2024, something that would iron out some of the logistical difficulties experienced this time but also, inevitably, have further implications for the quality of the competition.

Ultimately, in an organisation where decisions are driven by elected officials answerable to national associations, though, the greater numbers and bigger profits, are popular with the likes of the FAI taking home around €11 million plus enhanced grants which are funded from the overall surplus from a tournament that the Republic of Ireland would not have qualified for this time had those extra eight places not been up for grabs.

Whatever about the games, in any case, Uefa will point to the stories that this tournament has generated from Iceland and Wales on the pitch to Ireland off it and, in the end, the drama of a final that might end up being better remembered for the storybook way in which Portugal triumphed without their talisman than any other recent title decider.

Huge crowds turned out in Lisbon to welcome the Portuguese home and it is hard to begrudge the success to a side that contains so many remarkable tales of sacrifice and perseverance by players determined to make better lives for themselves through football.

The team is a lot harder to love for its football than the one that should have won this competition 12 years ago and the fact that they progressed to the competition so cautiously – they initially benefited from a structure that allowed four third-placed sides in the group stages to qualify – meant most neutrals were probably rooting for the hosts on Sunday.

Pepe had repeatedly referred in Saturday’s pre-match press conference, however, to the tremendous sense of solidarity fostered within the group by their coach, Fernando Santos.

To judge by the way in which his players repeatedly did whatever it was that was required of them to stay in the competition then overcame what looked likely to be the fatal blow of losing Ronaldo to injury in the final, it was more than just idle talk.

Having organised the tournament well, though, the French will wonder for a long time how it was that they didn’t win it.

Having forged an impressive new identity through the rounds leading up to the final, though, the team somehow forgot itself in the cauldron that was the Stade de France.

Even the next morning in Paris, there was a sense that there are far worse things that might have happened at Euro 2016.

1 Welcome to Iten in Kenya – home of champions and cheats
2 St Michael’s conveyor belt showing no signs of slowing down
3 Glasgow slam European door shut on Munster
4 Premiership Rugby confirms Saracens will be relegated
5 Conor McGregor’s racism and bigotry need to be called out
Real news has value SUBSCRIBE
Crossword Get access to over 6,000 interactive crosswords