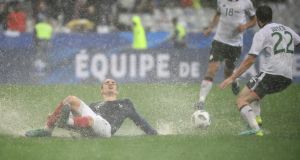 France’s Antoine Griezmann slips as he went through on goal during their pre-World Cup friendly win over Ireland in Paris. Photo: Franck Fife/Getty Images

‘There is,” says Eamon Dunphy in RTÉ’s World Cup promo, “a famous word in Russian for which there is no translation: Toska. It means, in essence, a deep yearning for something lucid, perhaps unobtainable, a sense that something is missing in your life.”

There is too a place for Ireland in this summer’s World Cup. Our trip to Paris, where our lads were but World Cup warm-up fodder for their hosts, was a lucid reminder that we can yearn all we like, but Russia 2018 was made unobtainable when we were toska-ed by Denmark. And after coming off the back of the Champions League final on Saturday and Tipp v Cork on Sunday, Darragh Maloney’s face was struggling to look up for this one, leaving you sensing if either Damien Duff or Richie Sadlier said “tell me why”, he’d give us a bar of I don’t like Mondays. So, the silicon chips inside our heads have been switched to overload the past couple of weeks as World Cup squads were named willy-nilly, brutally reminding us of what we’re missing, France showing off by omitting the likes of Dimitri Payet, Anthony Martial, Alexandre Lacazette, Adrien Rabiot, Kingsley Coman and Karim Benzema for assorted lousy form/slightly injured/bad boy reasons.

They did, though, name their strongest 11 for this encounter, apart from leaving Lloris, Kante, Pogba, Griezmann, Lemar, Thauvin, Areola and Hernandez on the bench, leaving Richie forecasting, in a less than positive way, that “we’ll spend most of the night without the ball”.

Damien was much more upbeat, reckoning we had to look at the game “from an exciting point of view” largely because we’d get to see Damien/Declan Rice again, the Duffer insisting he didn’t want to put pressure on the West Ham lad, but “the last player I can remember for Ireland who could play centre-half and centre-midfield was Paul McGrath”.

Richie, perhaps recalling Paul McShane was the last new Paul McGrath, was having none of it. “We do need to rein in our praise a little bit, comparisons with Paul McGrath probably aren’t overly helpful.” And when Damien waxed lyrical about Callum O’Dowda, Richie’s expression defined stoicism. Our panel for the night, then, was Mr Happy and Mr Hold Yer Horses.

Darragh handed over to Tony O’Donoghue at the Stade de France and so drenched was he we just assumed Martin O’Neill had poured a bucket of water over him as they chatted pre-match. Not so, it was the weather, while we were lathering ourselves in after-sun, Paris was being deluged. “It is bucketing down here,” said Tony, “they’re talking about hailstones – severe hailstones! – and they’ll obviously keep an eye out for the lightning as well.” Apart from that, the forecast was grand. But then the night’s biggest storm brewed when Tony met Martin, but Martin was perfectly tranquil, taking the meaning of “friendly” in a literal sense. That might have left Tony more shocked if he’d been struck by any of those bolts of lightning.

Over to George Hamilton and Jim Beglin who reported that a thunderstorm had just passed through, Jim declaring the atmosphere to be “electric” in a weatherly way, if not in a footballing sense. Off we went. “For Ireland, a pass finding another white shirt would help enormously,” said Jim, which was true, Darragh telling us come half-time that we enjoyed 17 per cent of the possession, which was about 16.5 per cent more that we could recall.

“Fluid and flexible against rigid and disciplined,” said Jim not long before our rigidity and discipline somewhat evaporated, Giroud putting France a goal up before that Fekir made it two. “This is a Karius moment for Colin Doyle, I’m afraid . . . that’s just a shocker,” said Jim, poor Karius having now entered football’s lexicon to define a goalie’s ’mare, like poor Doyle had just experienced.

“He obviously won’t be happy with that,” said Duffer of the ’mare, and you reckoned that might be true. And Darragh didn’t fill him with good cheer when he told him France had enjoyed 83 per cent possession. “Can we keep the ball better,” asked Duffer. “A million per cent.” To be honest, we’d have taken 20.

Richie, meanwhile, just worried France would bring on their bench, in which case our possession might tumble to zero-ish. But, as it proved, the second half was marginally better, although the highlight was still the moment the pictures were lost thanks to the electrical activity in the air, Darragh needlessly apologising.

1 Journey to learning skills in sport has three main stages
2 Ashleigh Barty now living up to all her earlier promise
3 10-man Arsenal show their heart to rescue a point at Chelsea
4 Gerry Thornley: Saracens very late to apologise for repeated cheating
5 Conor McGregor’s racism and bigotry need to be called out
Real news has value SUBSCRIBE
Crossword Get access to over 6,000 interactive crosswords