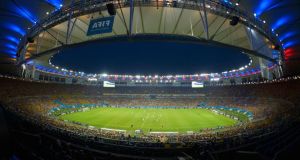 Dubliner Diarmuid Crowley is operations director at IMX, the company which is part of the consortium running the Maracana stadium.

For a self-described sports nut - “I’d watch anything, but GAA would be my number one” - Diarmuid Crowley is living the dream.

It is the World Cup in Brazil and he is just back from a few days in São Paulo to take in England’s World Cup clash with Uruguay and is now at Rio’s Maracanã stadium for France’s game against Ecuador. And this is what he calls work.

The 47-year old Dubliner is director of operations at IMX, part of the consortium running the legendary venue that will host the World Cup final on Sunday and has a coveted access-all-areas pass to prove it, though he says for the tournament his team takes a backseat during what is Fifa’s show.

“Our job was to get it ready in time and then we turned it over to Fifa. So for the month it is their baby but we are on stand-by to help them should they need it,” he says.

A business studies graduate from UCC Crowley qualified as an accountant when working for KPMG in Dublin and got an MBA while with Smurfit in Paris but always knew he wanted to get into the sports business. “I was just a big sports fan and it was a question of mixing your hobby with your job,” he explains.

Ill-fated The chance arrived after he got his MBA when he joined US sports management giant IMG Worldwide. In 1999 it opened an office in Dublin and Crowley worked there on the ill-fated Eircom Park project.

Then in 2001 he moved to London and was involved in the rebuilding of Wembley stadium becoming sales director for the venue after it brought in IMG for its commercial expertise in raising cash for redevelopment by pre-selling corporate and premium seating.

Success there led to IMG appointing him in 2008 to run its global office and take the Wembley model worldwide which saw Crowley working on stadium projects from Oslo to Brisbane. He increasingly found himself travelling to Brazil and last May moved down permanently with his wife Rachel and their two young daughters after IMG formed its IMX joint-venture with Rio businessman Eike Batista.

Now, as well as the Maracanã, IMX is also part of the consortiums running new stadiums in Recife and Porto Alegre and Crowley’s main job is selling the corporate and premium seating at the venues, a key part of the strategy to clear the loans taken out to build them.

But he also oversees IMX’s client representation business a role which has seen him get to know Brazil captain Thiago Silva: “It has been fascinating to see his development as a captain during the tournament.”

Getting all three of his company’s venues ready for the World Cup in time had its stresses, Crowley admits. “Brazilians are famous for doing things at the last minute which doesn’t always fit with the European psyche,” he says wryly. “You wonder sometimes if it is going to be delivered but somehow they always seem to get there in the end as you can see from the tournament.”

The local bureaucracy has made working in Brazil harder than he expected but he says the lifestyle more than compensates with the family having quickly adapted to Rio’s outdoors way of life. “We have the beach at the top of the road, the weather is great and the people are very friendly,” he says.

“Our little four-year old asked recently when is our holiday going to be over. She thought she was on holiday because she goes to the beach when she comes home from school.”

Tournament blur Despite supposedly taking a backseat to Fifa, the tournament has been a blur of looking after business clients in town for the football but Crowley has still kept a close eye on events on the field: “For me Brazil against Argentina would be the dream final. The danger for Brazilians is they still talk about 1950 and they would never forget it if they lost to Argentina on home soil. It is like us being beaten by Kerry in an All-Ireland.”

Despite all the soccer GAA is clearly still close to his heart and off the pitch seeing a World Cup up close has him proud to be Irish, even though we did not qualify. “The GAA is just as good as Fifa in running events,” is his expert evaluation. “I think that is fantastic for Irish people to know they have an association that is so professional in what they do. It is world quality and we take it for granted that the games run smoothly and Croke Park packs out at 80,000 for the big games and there is no hooliganism.”

Though he hopes to be home to see the Dubs on the third Sunday in September, Rio will be his base until 2016. IMX is already advising some of the big Olympic sponsors on their hospitality plans and will bid for the hospitality contract for the Games itself.

“It is the place to be,” he smiles. “For people in our business it ticks all the boxes. When you look at the demographics you realise the potential here is phenomenal and over time you are going to see Brazil emerge as one of the great sporting nations.”

1 Shock at golf clubs as sport faces shutdown in Level 5
2 Fresh faces and renewed appetite: Is this a new era for Irish rugby?
3 Colin Byrne: Hard to understand how golf has become the bogey man now
4 Level 5 golf shutdown: Ireland one of few countries to close courses
5 Andrew Porter fronting up to responsibility of starting Ireland role
Real news has value SUBSCRIBE
Crossword Get access to over 6,000 interactive crosswords