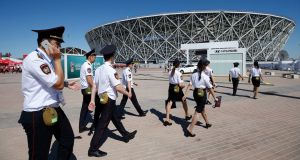 Security ahead of the World Cup Group G match at the Volgograd Arena between Tunisia and England. Photo: Owen Humphreys/PA Wire

Swarms of flying bugs are causing chaos for fans and broadcasters around Volgograd with fears they may be a nuisance to England players when they face Tunisia in their opening game of the World Cup on Monday evening.

It is understood the city of Volgograd, which is in the south east of the country, knew that the bugs – a mixture of mosquitoes and midges – would be a nuisance. Two days ago they deployed helicopters to spray the nearby marshland with pesticides.

It is understood City of Volgograd officials asked the Visit Russia tourism board to include in their guide to the city the fact they had “deployed chemical weapons” to target the insects. But it was pointed out to them, in light of the Sergei Skripal poisoning in Sailsbury, that this might not be the best choice of words.

It is thought that the pesticide did reduce the number of mosquitoes in the area over the weekend but they have returned with a vengeance and are wreaking havoc. Sky Sports News had to abandon a series of live interviews they had planned at the England team hotel on Sunday evening when their presenter Kaveh Solhekol was attacked by a swarm of bugs.

It is thought the position of the stadium, which is directly by the river Volga around which this city is built, might mean the number of bugs is even higher during the game on Monday evening.

The FA were aware of the potential issue of bugs in Volgograd having done a couple of reconnaissance visits to the city since the draw was made last December and England players are thought to be taking precautions before the game.

At the fan zone, where supporters are gathering to watch the games on a giant cinema style screen, security procedures mean liquids are banned. But officials have relaxed regulations to allow people to bring insect repellent into the area because the problem is deemed to be so serious. - Guardian service