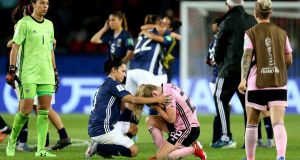 Phil Neville looked forward to the “business end” of the World Cup after watching his side defeat Japan 2-0 to reach the knockout stages as group winners. But while England can look forward Scotland can look only back with regret after they were knocked out in dramatic circumstances in their final Group D game.

The Scots blew a 3-0 lead inside the last 20 minutes to draw 3-3 with Argentina in Paris after they had looked in control of a third-place finish and a good chance of a place in the last 16.

Scotland’s woe was made all the more painful after the 90th-minute Argentina equaliser was awarded by a VAR decision, and then Lee Alexander saved the initial spot-kick only for a retake to be ordered because she had moved off her line too early. Florencia Bonsegundo made no mistake second time around to send the Scots out.

“It’s quite hard right now,” said Scotland’s manager, Shelley Kerr. “Obviously we were 3-0 up and looking quite comfortable. Their first goal changed the whole complexion. For 70 minutes we were very good and we didn’t manage to see the game out, but at this moment in time we feel very hard done by.

“It’s very difficult to comment right now, but I think there were certainly a few decisions again which didn’t go our way. This is a World Cup and you need the officials to make the right calls and I think there were a few that went against us. It’s bitterly disappointing. But saying that we should still manage the game. We’ll not take away that fact, but yes, bitterly disappointing.

“My emotions – I need to spend a bit of time with the players. We’re all devastated. We put so much into this game. Unfortunately we conceded three goals. It’s very tough right now. It’s still very raw. We need to pick up the players, because we put everything into that game.”

Neville, however was upbeat and insistent that England’s new possession-based approach will not be compromised under any circumstances

“The last 16 is about winning but the style is non-negotiable,” said the Lionesses’s coach at the end of a night when his side maintained their perfect start to the tournament but could equally easily have lost to a technically assured Japan. “We have to play with a certain style.”

England will not discover the identity of Sunday’s round-of-16 opponents untilThursday after their third win in three games saw them top Group D. They will face one of the best third-place finishers in Valenciennes, near the Belgian border, after a victory conjured on an evening when, once again, Neville rotated heavily.

While the recalled Ellen White scored twice, the newly introduced Georgia Stanway supplied a stunning assist on the half turn and the re-introduced Karen Bardsley made some vital saves, other players struggled.

In central defence Millie Bright did not look to have recovered entirely from a shoulder injury but Neville stood by his selection with only three days’ rest before the knockout stages begin.

“This was my strongest team to play Japan,” he said after making eight changes. “Certain players are experts in certain games. That’s what rotation is about. It’s strategic. I think we picked a powerful team with strength and experience, we looked like we could score from every corner but their goalkeeper made some great saves.”

Neville acknowledged that Bardsley showed why “she’s one of the top three keepers in the world,” that “we could have passed the ball better at times,” and “We needed the second goal,” but was still not unhappy. “We were so open and fatigued in the second half that we got exposed a bit. But we got another win and another clean sheet.

“We are where we want to be, ready to attack the business end of the competition. Japan are a team that play good football and know how to win. I’m a massive fan of Japan’s culture. The respect they show and the way they act. They play the right way and have some talented young players. They will be a massive force again.”

He possesses a gifted young player of his own in Stanway whose creation of White’s first goal will linger long in the memory. “If she keeps her feet on the ground she’s going to be one of the best players in world football,” he said. “She has that potential.” - Guardian