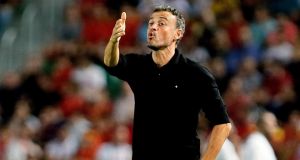 Luis Enrique has stepped down as Spain coach for personal reasons. Photograph: EPA

Spain coach Luis Enrique resigned from the team on Wednesday, three months after temporarily stepping aside for personal reasons, with his number two Robert Moreno taking on the role permanently.

“Owing to the fact that the circumstances which have prevented me from carrying out my role as coach since March continue today I have decided to leave the role,” Luis Enrique said in a brief statement on the Spain team’s website.

“I would like to show my gratitude to everyone at the Spanish football federation (RFEF) for the faith they have shown me and for understanding the situation.

“I also want to especially thank all the members of staff and players for their professionalism, and the media for showing discretion and respect for the situation.”

Federation president Luis Rubiales said the decision came entirely from Luis Enrique, who returned home hours before Spain’s second Euro 2020 qualifier at Malta for what the federation described as “family matters of an urgent nature”.

“It was a decision Luis Enrique took himself which we are grateful for. We will have a perfect memory of him,” Rubiales told a news conference.

“It’s a personal matter which doesn’t depend on us. We think it’s the best thing to do. We have stayed united behind Luis Enrique and the doors of the federation will always be open to him.”

Luis Enrique, 49, became Spain coach last July after their exit from the 2018 World Cup to hosts Russia under interim coach Fernando Hierro after Julen Lopetegui was sacked on the eve of the tournament for negotiating a move to Real Madrid.

A former coach with AS Roma, Celta Vigo and Barcelona, Luis Enrique took charge of Spain’s Nations League campaign, where they failed to reach the semi-finals, finishing second in their group behind England.

He began their Euro 2020 qualifying campaign with a 2-1 home win over Norway while Spain have won every game since Moreno took temporary charge, beating Malta 2-0 in March and winning 4-1 at the Faroe Islands and defeating Sweden 3-0 at home this month.

“It’s a bittersweet day for me. I dreamed about being a coach but not in this way,” said the 41-year-old Moreno, who has no experience as a first-team manager apart from in the last three months as the national team’s caretaker coach.

“We’re going to work honestly and try to take the work Luis Enrique did to the highest level by qualifying for and winning Euro 2020.”

Rubiales said that he did not consider any other candidates to take the vacant role.

“Robert Moreno was the only solution we considered,” he said.

“We started a new sporting project here a year ago which is going stupendously well and we wanted that project to continue. If we’d have hired a different coach the project would have changed.”