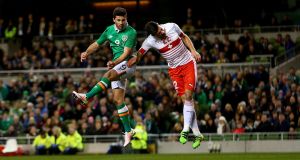 Ireland’s Shane Long climbs above Switzerland’s Fabian Schar before seeing his header come back of the post at the Aviva Stadium. Photograph: Donall Farmer/Inpho

Martin O’Neill heads into the Republic of Ireland’s game against Slovakia tomorrow night with just one fully fit striker after Robbie Keane became the latest forward over the weekend to return to his club in order to receive treatment on an injury.

Jon Walters, Daryl Murphy and Kevin Doyle are also out, although Doyle, who underwent surgery over the weekend to repair the gash he sustained in Friday’s game against Switzerland, has stayed on with the squad for the moment. Doyle said the operation went well but that he would be absent for a few weeks.

The manager appears unconcerned. It is understood a couple of those who left may have been fit enough to to play some part if the stakes were higher.

Keane struggled with a knee injury through most of last week and a decision was effectively taken to let him return to the United States on Friday night.

As it is, Shane Long remains the squad’s only fully fit out-and-out striker. Anthony Pilkington, who has been playing up front for Cardiff City in recent times, comes back into the reckoning having missed the win over Switzerland.

The game may represent an important opportunity for the 27-year-old whose fitness issues have severely hindered his progress on the international front.

He will have to prove his fitness on this occasion, of course, and that is unlikely to be taken for granted by a manager who sounded sceptical last Thursday about the player’s chances of making his squad for the European Championships.

O’Neill is far better fixed in other departments and will have been encouraged by the way in which some of those given chances to shine on Friday duly did so. The central defensive partnership of Ciaran Clark and Shane Duffy looked particularly impressive and Duffy seems likely to feature again at some stage in this game as the manager looks to give him another taste of senior international football.

Rob Elliot is expected to start in place of Darren Randolph, who played 90 for minutes on Friday and did well, albeit in largely unchallenging circumstances.

The manager has suggested that he will make changes in other areas too as he tries to keep as many players as possible involved and give others who are slightly outside the core group chances to catch his eye.

The squad reassembled in Castleknock last night having had the bulk of the weekend off. There was a brief session on Saturday morning but yesterday’s training and scheduled media were cancelled as O’Neill opted to allow the players more time with their families.

Slovakia will, meanwhile, train at the Aviva Stadium this evening ahead of what is intended by them, no doubt, to be a test against “British style” opposition ahead of Euro2016, where they will face both England and Wales.

They arrive off the back of a scoreless home draw with Latvia in which manager Jan Kozak seems to have been sufficiently focused on securing a result to have made just two substitutions over the course of the 90 minutes.

In the end, both Martin Skrtel and Martin Hamsik, two of the side’s most experienced and important players, were replaced late on but both are expected to be fit and available for tomorrow night’s game.