Gianni Infantino says he ‘has momentum’ in campaign 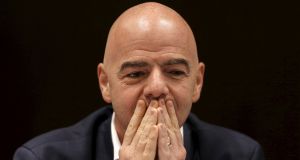 More than half of soccer fans worldwide do not believe Fifa can restore its tattered reputation, according to a poll commissioned by Transparency International before this week’s presidential election.

As the last-ditch electioneering continued, there was also a reminder of the long shadow the ongoing US and Swiss criminal investigations are casting over the five-way contest. In its annual report, HSBC confirmed it had received inquiries from the US Department of Justice (DoJ) regarding “certain individuals and entities that are or may be associated with Fifa”.

Other banks are believed to be similarly co-operating. Fifa insiders are bracing themselves in case the department of justice, which precipitated Fifa’s collapse with May’s indictment and arrests, or the Swiss authorities plan further action this week.

According to the poll, carried out on its behalf by Football Addicts, almost seven in 10 fans have no confidence in world football’s crisis-hit governing body. In the UK, that figure was 76 per cent.

Mistrust was highest in Chile, Argentina, Ireland, South Korea and Spain, while fans in Thailand, Japan, Russia, South Africa and Qatar were most likely to say they still had confidence in Fifa.

Asked to chose from the list of five candidates who will contest the election – the favourites Gianni Infantino and the Asian Football Confederation president Sheikh Salman, the former Fifa executive Jérôme Champagne, the Jordanian Prince Ali bin al-Hussein and South Africa’s Tokyo Sexwale – six in 10 chose “none of the above”.

The scale of the challenge facing Fifa in restoring any degree of public trust is reflected in the findings. Gareth Sweeney, editor of Transparency International’s Global Corruption Report: Sport, said that if a package of reforms is not passed on Friday, before the presidential vote, it would further damage credibility.

“If the reforms don’t go through or are further watered down, then it will be clear that Fifa does not want to change,” he said. Transparency International was engaged by the suspended Fifa president Sepp Blatter to help with reform proposals in 2011 but cut its ties in frustration after its proposals were ignored.

Infantino said he would recommend the latest reform proposals – broadly welcomed but criticised for their lack of independent oversight – to Fifa’s members.

“I am entering these final days of the campaign with a real sense of momentum for a new beginning and optimism for the election and for the future,” said Infantino.

Infantino, who entered the race when the Uefa president Michel Platini was forced to step aside before being banned for eight years, has received the backing of Uefa, while Sheikh Salman claims the support of the AFC and the Confederation of African Football. But bloc votes are not expected to be as strong as in previous Fifa elections, adding an extra layer of unpredictability.

The rumours accompanied his decision not to travel to Kuala Lumpur to hear Fifa’s reform plans, instead preferring to remain in Zurich. In his absence, Infantino travelled to Malaysia.

Friday’s vote is expected to go beyond the first round. Guardian Service