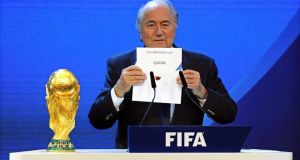 Speaking in Belfast, Fifa president Sepp Blatter has insisted the 2022 World Cup in Qatar will finish no later than December 18. Photograph: Walter Bieri/EPA

Fifa president Sepp Blatter has insisted the 2022 World Cup in Qatar will finish no later than December 18th, a move which could protect English football’s traditional St Stephen’s Day programme of games.

Uefa has proposed playing the final at the tournament on December 23rd to lessen disruption to its own international matches.

That sparked uproar in Britain as it would threaten the traditional festive club programme.

Blatter, speaking for the first time since a Fifa task force confirmed November/December for the 2022 World Cup, said: “Not until the 23rd, definitely not. We have to stop at the 18th.”

The Fifa president was speaking in Belfast ahead of a meeting of the International FA Board.

A final decision on the dates will be taken by Fifa’s executive committee on March 20th.

Blatter admitted the decision to hold the World Cup in the winter in order to avoid the summer heat of Qatar had infuriated clubs and leagues.

He said: “They are not so very happy and it’s so good now to make a little bit of noise about Fifa and about the World Cup in Qatar.

“There are more than six years, particularly seven years, to prepare. And there is a goodwill. There will be a solution and I’m sure everybody will be fine.”

Blatter also ruled out paying any compensation to clubs for the disruption but said he was in touch with European Clubs’ Association chairman Karl-Heinz Rummenigge, who has demanded financial recompense.

He added: “I don’t think why they should. This is a problem that we have not now discussed in depth. But, definitely, we are in contact.

“I have been personally in contact with Karl-Heinz Rummenigge before this decision to see how a solution can be found.”

1 Seán O’Brien: Anger over my parents’ break-up never left me
2 Will Connors chops his way to the front of Ireland’s openside queue
3 Munster earn bank holiday bonus in entertaining Thomond Park tussle
4 Gibson-Park, Earls and Kelleher all in race to make Ireland’s French finale
5 The Offload: Outgoing Tom Grace will be missed by IRFU
Real news has value SUBSCRIBE
Crossword Get access to over 6,000 interactive crosswords