Scotland not too pretty in pink as Slovakia deliver heavy blow 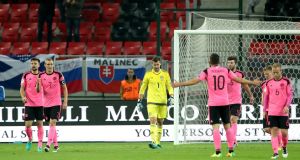 Even given Scotland’s recurring and deep-rooted woes, nobody could have foreseen this swift a regression. The Scottish FA now finds itself in the grip of a crisis and in need of firm decision-making. Gordon Strachan’s tenure as manager became well-nigh impossible to defend during this complete capitulation in Slovakia. The only legitimate argument for retaining Strachan now may lie in who would want to succeed him.

Heavy defeat in this match, coupled with the dire 1-1 draw against Lithuania just days earlier, means Scotland’s World Cup aspirations are greatly diminished after just three group games. A couple of sub-plots are far more serious for Strachan; that his own team are getting worse and Slovakia, ultimately so comfortable here, are moderate. The hosts did not actually seem to believe their own luck.

The case for the 59-year-old being in charge for the trip to Wembley on 11 November to face England has never been weaker. His approach in Slovakia, with Scotland far too open than was sensible for an away fixture, proved the latest baffling act of Strachan’s reign. And to think, he was cheered from the rafters in Faro as Scotland bowed out from an ultimately failed Euro 2016 qualifying campaign with victory over Gibraltar. Twelve months really is a long time in football.

Scrutiny of Strachan is such that apparently his every selection move is questioned. To an extent, this has been legitimate. Oliver Burke, a £13m player heralded as equivalent to Kenny Dalglish in international importance by Scotland’s assistant manager Mark McGhee, could not even command a place among the substitutes here despite starting against Lithuania. Hull City’s Andy Robertson, who has a minor achilles problem which forced him to miss training on Monday, was replaced at left-back by Kieran Tierney.

Strachan’s hailing of the “outstanding” Chris Martin after that Lithuania game always carried a public relations danger. The manager duly picked Steven Fletcher rather than Martin as the spearhead of a 4-3-2-1 formation which was an alteration from recent games.

The Slovakian public’s disquiet with their misfiring national team was highlighted by the vast swathe of empty seats in Trnava. Their previous two matches had failed to yield a point, leading the Scottish camp to point towards pre-match pressure on the hosts. Slovakia were at least boosted by the return from suspension – and a broken nose – of their captain Martin Skrtel.

Scotland opened the more confidently, with Slovakia tentative. A midfield battle was broken up in the 12th minute by an excellent Fletcher chance, which he completely miscued after a fine pass from Robert Snodgrass. Slovakia’s response was a long shot from Jan Durica, which David Marshall batted away not entirely convincingly.

High controversy followed. Marshall was again culpable when his save from the unmarked Marek Hamsik fell straight to the feet of Robert Mak but the circumstances which triggered this Slovakia attack were highly dubious. Fletcher was quite obviously fouled by Durica in a pre-meditated fashion when looking to seize on a loose pass. Scotland were still complaining as Mak lashed home to afford the hosts a lead they barely deserved. Slovakia had their first goal in 423 minutes of international football.

Snodgrass had the opportunity for an instant reply with Matus Kozacik equal to the Hull City player’s near-post attempt. This bluntness despite long spells of territorial dominance rather summed up the Scottish first half. At the opposite end, Marshall required acrobatics to deny Mak a second, five minutes before the interval.

Strachan resisted the temptation to make changes for the start of the second period, presumably in the belief that this average Slovakia side could be breached by what he had already deployed. Yet his very system, and the lack of protection it afforded his full-backs, proved Scotland’s undoing for a second time.

In something akin to slow motion, or a lesson in how not to defend, Hamsik was left with time and space to pick out Jakub Holubek. The Zilina midfielder pulled the ball back for Mak, who gleefully beat Marshall once again. Callum Paterson, Scotland’s right back, had been horribly isolated.

Strachan sent on Leigh Griffiths and Ikechi Anya in reverting to a 4-4-2 formation. Not only was this a risky call in terms of the game, it had potential ramifications for Strachan’s future if Slovakia capitalised on a more adventurous approach. That was not really the key to the home team’s third goal. A straightforward corner from Mak, suddenly the tormentor in chief, found the head of Adam Nemec. With Grant Hanley beaten and Marshall helpless, Slovakia were three ahead.

Toothless in attack and soft in defence – Sunday amateur teams would realise this is not a handy combination. The responsibility for all sits on Strachan’s highly paid shoulders.