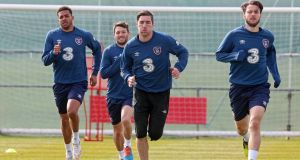 If losing out to England in the tug-of-war for Jack Grealish was a blow for Martin O’Neill and the Republic of Ireland, then the England squad named on Thursday made it fairly plain why Roy Hodgson was so anxious himself to pin down a 20-year-old who has actually done little so far bar show a bit of promise in the Premier League.

Grealish wasn’t eligible for selection yet but naming 19-year-old midfielder Dele Alli who has played just a handful games for Tottenham since making the step up from League One, gave an indication of where Hodgson is having to set the bar at this stage.

Alli looks pretty good but he is no teenage sensation. Still, with just a couple of established names missing through injury, there simply aren’t more experienced English players of the required ability to keep him waiting.

The reason seems pretty clear. Hodgson is entirely reliant on his country’s domestic league for players to choose from and last weekend just 61 who are eligible to be selected for England started games for the 20 competing clubs.

What O’Neill wouldn’t give for that, of course. Just about every single player eligible for Ireland who is even in contention to play for a top-flight English club makes the Ireland squad these days and three years after Germany’s last visit to Dublin so cruelly exposed the lack of depth to Giovanni Trapattoni’s international panel, the Northerner is clearly struggling to add any depth.

Darren O’Dea, Simon Cox and Stephen Ward were amongst the players to start that 6-1 defeat on October 12th, 2012, and with several regulars missing and one or two of the squad’s brighter prospects not helping by showing their inexperience against such strong opposition, there was little the Italian could do to shore things up as the Germans went on the rampage.

Afterwards, as he had regularly been doing in the wake of his team’s failure at the Euro 2012, Trapattoni made it fairly clear he did not believe he could be blamed given the pool of talent available to him. Most, he suggested, simply weren’t up to the required standard while others, he clearly felt, were either overrated (Wes Hoolahan) or not up to the role his critics wanted to see them play (James McCarthy).

O’Neill might well agree but, ominously for the successor, he concluded there was nothing coming through to improve the situation.

Despite that, Trapattoni left just short of a year later insisting he would have been happy to stick around and build a new Ireland team. He must be somewhat relieved not to have been obliged to make good on the promise. Two years into his reign, O’Neill has handed international debuts to just five players; of whom perhaps onle Shane Duffy would have featured on many people’s radar when his predecessor was being edged towards the door.

Of the five, three had previously earned underage caps as a teenager and only one so far, Cyrus Christie, has kicked a ball competitively for the country.

Last season, O’Neill used 32 different players in nine international matches, precisely the same number as Joachim Löw in one game more. The German coach’s options must be the envy of Hodgson, though, never mind the Ireland boss.

The latter jokes these days about the scale of his familiarity with the Championship and if the Premier League keeps sucking in talent from the around the globe the way it has been then his England counterpart may have to acquire a first-hand knowledge of the English second tier himself.

In just the two Champions League ties between English and German sides this week, meanwhile, Löw had nine eligible players who hadn’t been involved in his last squad to watch. Just about all have played senior or underage international football before and if there was one drawback it was that, in line with the well-worn cliché about German youth development, eight of them were midfielders.

For O’Neill, Anthony Stokes would be about the size of it in a European week except Celtic told the striker over the summer he had no future at the club and he recently missed out on the chance to join up with Neil Lennon at Bolton Wanderers where he would presumably have got some game time again.

That leaves Daniel Cleary, the young Liverpool centre-back whose inclusion in that club’s Europa League squad says as much about manager Brendan Rodgers’s attitude to the competition as it does about the Dubliner’s progress.

Rodgers, in any case, damned the teenager somewhat with faint praise in advance of Thursday night’s game against Sion when, having noted his improvement and commitment, he suggested; “If he doesn’t get the game time here at the moment there will probably be a loan period for him.”

There are others on the margins of Premier League clubs with much attention focused recently on Daniel Crowley, the Arsenal midfielder on loan to Barnsley, who seems set to declare for Ireland and Josh Cullen at West Ham, who already has. Everton’s Sam Byrne, meanwhile, along with Kenneth McEvoy of Tottenham and Manchester City midfielder Jack Byrne, currently on loan to Dutch side Canbuur, are just three of those approaching potentially defining points in their club careers.

Many of them, it’s worth noting in the wake of Grealish saga, were also born and bred in England, which is not to remotely question their entitlement to play for Ireland but rather to acknowledge the FAI, and Irish football as a whole, had precious little to do with their development.

Iceland, meanwhile, have comfortably overtaken Ireland in the world rankings and are already qualified for the European championships with a squad of home-grown talent produced after a decade of intensive investment in facilities and coach education.

Much of which might have come to nothing if the players weren’t getting their game but one featured in the Olympiakos side that beat Arsenal this week and the rest of the squad is spread across more than a dozen countries – there are three in China – with less than half in the Nordic countries that look to be their most obvious destinations. There’s even a couple of the next generation in the academies of PSG and Bayern Munich.

O’Neill, meanwhile, like Hodgson, must go on hoping the Premier League policy makers deign to do him a favour so that the tide might be turned at some point.