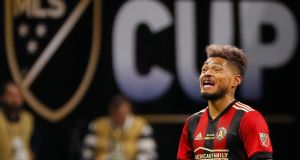 Josef Martinez of Atlanta United after scoring against the Portland Timbers in the MLS Cup in Atlanta on December 8th. Photograph: Kevin C Cox/Getty Images

Shortly after stroking home River Plate’s third goal in the Copa Libertadores’ victory over Boca Juniors at the Bernabéu last Sunday, Gonzalo “Pity” Martinez announced he was leaving the club. At 25, he has just broken into the Argentinian national team, and his improved form over the past couple of years saw him linked to a string of European suitors that included Sporting, Spurs, and Lazio.

Eschewing those more glamorous locations, Martinez chose instead to move to Atlanta United in Major League Soccer (MLS), a decision that illustrates how something strange and wonderful is going on down in Georgia.

Some 24 hours before Martinez made international headlines, Atlanta United won the MLS title. In just their second year in existence, their 2-0 victory over Portland Timbers was achieved by a team, including Dubliner Chris McCann, that many believe is one of, if not the, best the (admittedly still young) league has yet seen.

Over 73,000 watched the final at United’s own Mercedes Benz Stadium, just 1,000 shy of the record crowd that saw the New York Cosmos (featuring Franz Beckenbauer and Carlos Alberto) defeat the Tampa Bay Rowdies in the old North American Soccer League decider in 1978.

Comparisons matter because Atlanta are far removed from the tired, old Cosmos template of importing superannuated stars on inflated salaries in a quest for instant glory and short-term media attention. The arrival of Martinez next spring represents more evidence that their preferred transfer playbook involves buying young South American talent on the way up rather than geriatric European icons on the way down.

The newcomer will replace Miguel Almiron, a Paraguayan who, after two stellar seasons in America, is rumoured to be on his way to the Premier League for maybe twice the $13 million Atlanta paid to lure him north from the Argentinian first division in 2016.

Should he also chose to go across the Atlantic Josef Martinez may yield a similarly lucrative return on the $5 million he cost from Torino. Having struggled to score regularly in Serie A, the then 23-year-old Venezuelan arrived in 2017 and hit 50 in 54 outings, shattered the MLS single-season scoring record with 31 in this campaign, and, on $1.2 million a year, isn’t even in the top 30 salaries in the league.

Atlanta’s willingness to splash serious cash on largely unknown players (a record $15 million for 19- year-old Ezequiel Barco from Independiente of Argentina this past summer) who won’t immediately impact at the box office sums up how their approach is markedly different from their competitors.

Rather than pay a fading star like Wayne Rooney or Bastian Schweinsteiger $6 million a year, as DC United and Chicago Fire have done, to garner favourable coverage and attract casual fans to games, Atlanta have opted for a more organic investment strategy, building a proper team (they have the ninth largest payroll) on the belief that the quality of the fare on offer week in week out will bring the crowds.

The buy-in from locals has been so complete that last Saturday was the eighth time this season they broke 70,000 for a home match. More than half of those seats are filled by season ticket holders.

“I realised we could sell MLS as this growing league where if you are a younger player, you could come develop your game, and then move on,” said Darren Eales, club president. “The payoff for us is it then makes it easier for us to go and attract that next young star, because we’ve proved the concept and now we can attract even better talent. So it’s a virtual circle. We get better talent to the league, it makes our team stronger, and the reality is we can sort of become part of that global game of football.”

Eales has seen this play before. He was club secretary at Tottenham when they brought in 22-year-old Luka Modric for £16 million and sold him on to Real Madrid for almost twice that.

An Englishman, he was the first person hired by Arthur Blank, the billionaire owner of the NFL’s Atlanta Falcons, when he purchased an MLS franchise. He may well prove to be the club’s most important signing of all.

With an eclectic resume that includes degrees from Brown University and Cambridge, stints playing college and minor league soccer in America, his revolutionary mindset means he could yet end up having a more enduring impact on the MLS than any of the myriad European imports over the past two decades.

After bringing former American international Carlos Bocanegra on board as technical director, it was Eales’s idea to pursue Tata Martino as Atlanta United’s first head coach. The rarest of things in MLS, a foreign manager with a genuinely impressive CV that includes stints in charge of Lionel Messi at Barcelona and Argentina, he was exactly the type of boldface name that nascent South American talents would be eager to work with.

The attractive way in which Martino had a brand new club instantly winning was bound to attract outside interest, and he is leaving too, reportedly to take over Mexico. With a new manager needed and some of the best players in MLS history about to depart, Atlanta and Eales’s masterplan faces a fresh set of challenges next year.

That those under consideration to replace Martino include Jorge Sampaoli (formerly Chile, Argentina and Sevilla) and Boca Juniors’ Guillermo Barros Schelotto suggests they know exactly what they are doing.