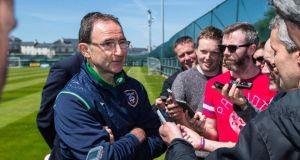 Republic of Ireland boss Martin O’Neill addresses the assembled media at Gannon Park, Malahide. “It’s up to us to win. I’m not minimising the importance of the game.” Photo: Cathal Noonan/INpho

Perhaps his involvement in Tuesday’s minor car accident has given him a particular sense of perspective but when Martin O’Neill stood pitch side in Malahide yesterday and suggested ‘we’ shouldn’t ‘play down’ the importance of Saturday’s game against Scotland, there was some confusion amongst the press corps.

Surely nobody at our end could be accused of that?

In his comments, the manager has been consistently careful to avoid setting any traps for himself that might be sprung by Ireland dropping points on Saturday evening.

But there was still more than a hint of understatement about his take on things if the visitors actually prevail here.

“If Scotland beat us then there’s a gap of five points and with four games left,” he said before adding, “that might be hard to pull back from, particularly if by the time that we finish Poland and Germany have won.

That said, he suggested, sometimes these things take unexpected turns. He cited the World Cup qualifying campaign of 1982 when Northern Ireland progressed behind Scotland. Portugal had started the campaign well and Sweden finished strongly, but both missed out on a place in Spain.

“We got beaten in June (’81) by Sweden. When we went out, we hadn’t played for a while. Just like this. But we went to Sweden and lost. Sweden had got off to a poorish start and that game, while it didn’t help them a great deal it was certainly a blow to us.

“But they played seven or 10 days (it was actually 21) later against Portugal and I remember saying to Pat Jennings that they would beat Portugal. And they did beat Portugal. So we were right back in it again.

“And was there not a case here under Jack’s regime where he thought everything was finished? But I wouldn’t want to be leaving it like that. It’s still in our hands and while that opportunity is in our hands and firmly in our hands let’s try and take it.”

O’Neill maintains Ireland can win the game if the team perform the way it did when chasing things against Poland in March. The idea this time, though, is to seize the initiative from the start.

“If we could start like that in the game; if we could get ourselves going and try and get the first goal rather than chasing things that will give ourselves a chance.

“We’ve got to apply some pressure and we’ve got to try and get on the front foot early in the game and establish some sort of foothold.”

A good deal may depend, he hinted, on whether or not Robbie Brady is on song against Scotland. Last weekend, his set-piece deliveries were outstanding but, the northerner, acknowledged, March was a different story.

The Hull City player is all but certain to start at this stage but doubts remain about a handful of other positions.

Harry Arter left the camp for a spell yesterday to have a groin/hip problem assessed and he may be yet miss out even on a place amongst the substitutes. But Robbie Keane is said to be in good shape after arriving in from the US.

Paul McShane (injured toe) is the only other significant injury concern.