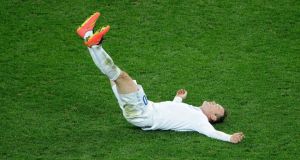 I ain’t got nothing but love babe

Liverpudlians should feature heavily at 8 PM when Group D returns with England and Uruguay in Sao Paolo. Group C offers the remainder, Japan and Greece at 11 PM preceded by Colombia versus Ivory Coast at 5.

Day seven saw the elimination of Australia and Spain from Group B, the latter dethroning apt as, in Madrid, Juan Carlos signed his abdication into law. Criticised for a hunting trip to Botswana in 2012, fellow Spanish-speakers Colombia will hope to snag figurative big game of their own in Brasilia against Les Éléphants. Their first meeting, a win would sit either pretty on the cusp of qualification.

2014 debutant Howard Webb whistled the first half to distraction, los Cafeteros happy to sit back and break from deep. Scattered Ivorian passing built no pressure and we’re scoreless.

My cousin in Perth sent a care package which provides dinner: crocodile jerky. Boy, this saltie sure is chewy. No beer unfortunately, but a turquoise wife-beater emblazoned ‘you drongo!’ I hope that’s not too rude to have on a dishcloth.

While for the 5 PM victory was preferable not mandatory, England and Uruguay must win. Chilesy hosts Hoddle and Lee Dixon, with Gus Poyet the affable villain. Rooney and Raheem swap whilst Luis Suarez returns for la celeste. Fit enough?

Since we’re on ITV, I should mention I’ve discovered my gambling alter-ego in recent days, Broke Lad. Browbeaten into liquidating his favourite (only) current account with a slew of bets hinted in ad after ad, he’s lucky I discovered out-of-date fruit cups in one of the bike panniers (cans-wise, there wasn’t much money). I’m on unlikely schnapps this evening of kiwi, mandarin, pear, and red grapes. Woof!

‘Let’s go to our commentary team of Andy Townsend and Clive Tyldesley. ’ Do we have to?

England are slaves to that Mersey beat. Suarez put Uruguay up at the break, evading Goodison’s own Phil Jagielka to nod in Cavani’s delicate loft.

Oh my days, they’ve only gone and lost it! ‘You won’t see another goal like that in this tournament,’ says Glenn Hoddle. Offside, Suarez made a run hoping for a flick off Muslera’s punt. Played on by his Liverpool skipper, one touch and the ball slashed over Hart’s shoulder. Jagielka adrift again. Wazza’s first tournament strike 10 minutes prior just added agony to injury come fulltime.

Oh England. How do you do it? ‘Gerrard and the Pacemakers’ named not for the ability to scale league tables but for the aid necessary to watch them, aghast. A celeste point against the Azzurri in the Blues Brothers’ Natala reunion next Tuesday and England depart before the second round for the first time since 1958.

Odds for the 11 PM blare immediately, snagging mourning punters. Broke Lad and I have just enough time to boot the laptop and shunt that savings account into play. What colour will the fourth yellow card recipient’s boots be? How much distance will Kagawa cover in the first seven minutes? Total tattooed surface area of goalscorers’ forearms, to the nearest square centimetre?

Group C’s first round losers face off in Natal. The Samurai Blue and the Ethniki are ailing, three points the perfect tonic. Buckets of Japanese possession forecast, this looks the group’s bronze medal match. Clarence Seedorf is serene in the corner, a punctured trio of Rio, Big Alan, and Gary alongside. Kagawa isn’t starting, so that’s twenty quid gone already.

Has anyone tweeted their ‘world cup seat’ to the BBC hashtag? I haven’t. No-one, I repeat, no-one, wants a gawp at this rancid settee underneath. Like a porcelain wetsuit, it’s just not going to happen.

I do a goal-dance before the restart: some starjumps and two wibbly sit-ups.

Well, fine. Double-decker bolted to the eighteen-yard box, Japan are limited to half-chances and Greece eke a point. Group C will finish as it stands I reckon.

A hundred and fifty down, tomorrow’s (today’s) matches can’t come too soon!