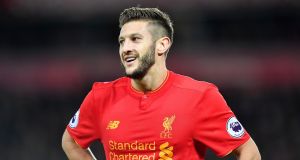 Adam Lallana: “Hopefully he will do well enough to get the job on a permanent basis.” Photograph: Dave Howarth/PA

Adam Lallana has urged the English Football Association to formalise Gareth Southgate’s appointment as England’s full-time manager so the team can begin to establish a discernible identity.

The Liverpool midfielder, who scored the only goal of Sam Allardyce’s 67-day tenure, missed Southgate’s first two games in charge with a groin injury but is in line to start tomorrow’s World Cup qualifier against Scotland at Wembley.

Lallana has established himself as a key performer under Jürgen Klopp at club level.

There is an acceptance it is harder for a manager to stamp a philosophy on an international team, when squads meet up for a few days on a handful of occasions.

Yet Lallana said: “It would be nice for Gareth, and for us, quite soon to know whether he’s going to get the job on a permanent basis so you can build towards having a certain identity that your manager wants you to have.”

“That’s what a manager is there for. I’m sure over the next few days the manager will be telling us what he wants for the Scotland and Spain games. Eventually it would be nice for him in the longer term to put a structure in place.

“You need stability. What you don’t have at England is the time that you get at club level. You can’t prepare for a campaign as you would for a league over the course of the season – it’s not possible, so it’s a different challenge.

“I’m sure Gareth will want to have that and we are ready to fight for him in the matches. I think everyone is keen for the situation to be resolved, even Gareth himself probably. We are looking forward to doing well for him and fighting for him over the next two games. Hopefully he will do well enough to get the job on a permanent basis.”

The FA will begin the process of appointing a full-time manager after next Tuesday’s home friendly against Spain, and it appears only a humiliating defeat by Scotland would jeopardise Southgate being offered the position through to the 2018 World Cup finals at least.

Those within the governing body have been impressed with how he has approached the role since stepping into the breach following Allardyce’s departure in September.

Southgate will still need to accept the terms proposed but, having initially doubted he had the experience to flourish, the 46-year-old is now more inclined to accept an offer from the FA.

It remains to be seen how his employers would react should England lose tomorrow, particularly given the lack of viable alternatives.

Arsène Wenger, who has support within the set-up, is expected to sign a new contract at Arsenal. Steve Bruce and Ralf Rangnick, the sporting director at RB Leipzig, were interviewed over the summer before the FA opted to appoint Allardyce.

Southgate is expected to recall his captain and most experienced player, Wayne Rooney, against Scotland, most likely as a No 10 playing behind Harry Kane, in the absence of the injured Dele Alli.

Lallana should also start having played a significant part in Liverpool’s rise to the top of the Premier League.

The 28-year-old has witnessed Klopp exert his influence at Anfield over the past 12 months with the team now playing the kind of feverish, energetic football which marked out the German’s sides in the Bundesliga.

“Your manager represents the team and almost brings the identity to what he wants the team to do, how he wants it to act and play,”Lallana said.

“It has shown over the last year at Liverpool, where we have gradually become what he wants us to be. It doesn’t happen overnight. It’s a work in progress. It’s been down to long hours training, pre-season and three sessions a day, repetitive drills where he drums in what he wants us to do.

“Practice does make perfect and, when you know what’s asked of you by your manager, you do it. That’s what you are seeing at the minute: that hard work pays off.

“For quite a few years now we’ve not done brilliantly at major tournaments, so it’s up to us to maybe find an identity with the national team. Whether it’s the mental side of the game at tournaments that we’re struggling to cope with, we need to overcome that.

“By good hard work I think we can do that. Confidence doesn’t come overnight. The Iceland game at Euro 2016 hurt and damaged us but, under Sam and now under Gareth, we’re gradually starting to rebuild. The Scotland game is another big stepping stone.”