Ictu calls for ‘discrimination’ and ‘slavery’ of workers to be addressed 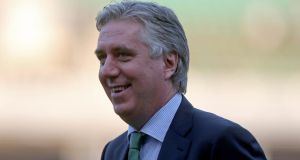 FAI chief John Delaney was contacted the Irish Congress of Trade Unions general secretary Patricia King over the treatment of labourers in Qatar building the facilities for the 2022 World Cup. Photograph: Donall Farmer/Inpho

The Irish Congress of Trade Unions has called on the FAI to take up the cause of immigrant workers in Qatar with its general secretary, Patricia King, urging chief executive John Delaney to speak out on the “discrimination, slavery and contempt,” being endured by those building the facilities for the 2022 World Cup.

In a strongly worded letter, variations on which have also been sent to the IFA by the Ictu’s Belfast leadership as well as to the English FA, SFA and FAW by the Trades Union Congress (TUC) in Britain, King suggests that if something is not done to stop the suffering of the workers, estimates of 4,000 World Cup related fatalities by the time the tournament kicks off may prove to be “tragically conservative”.

In the face of widespread international condemnation, the Qatari authorities have repeatedly claimed that they are addressing the issues and working to improve the conditions of those mainly Indian, Nepelese and Bangladeshi workers who are worst affected.

In particular, the government there had given commitments that laws tying workers to employers who often hold their passports and prevent them either moving on to new jobs or returning home even when they have failed to pay them or honour other terms of their contracts would be abolished, but according to the TUC’s Play Fair Qatar campaign the situation remains largely unaltered.

In the week that the FAI’s leading figures will be in Zurich for the Fifa Congress, King asks Delaney to “speak out and call on Qatar, through whatever channels are available to you, including but not solely via Fifa, to address urgently the plight of the workers preparing the country to host the World Cup.”

Among the specific injustices raised is the “Kafala” laws that allow employers to exert such strong control over its workers is the arrangement of paying workers different rates according to their country of origin, the terribly low rates of pay that generally prevail, the lack of safety inspections and the inability of workers with complaints to have their cases heard.

The FAI has yet to consider the contents of the letter which follows a similar request for action two years ago from then Ictu general secretary David Begg who, among other things, expressed the hope that the conditions attached to the tournament being awarded to Qatar might be revisited so as to improve the plight of workers.

Delaney did not publicly comment on that at the time and when asked about Qatar much more recently, he dealt primarily with prolonged debate over the timing of the finals which, he suggested, had “damaged the brand of Fifa”.

With Play Fair Qatar having suggested that some 62 people per game may end up dying to make the tournament happen and Amnesty International issuing a damning report last week on the lack of progress delivered by the authorities, the timing debate, farcical as it was, is sure to be comfortably overshadowed in terms of the long-term damage it does to the game’s international governing body.

Despite some pressure from sponsors, there has been a marked reluctance at Fifa level to confront the consequences of the dubious decision to award Qatar the tournament.

1 Diego Maradona dies of heart attack, aged 60
2 Keith Duggan: Through the glories and the disgraces, we were all Maradona addicts
3 Handful of God: Five magic Maradona moments
4 Darragh Ó Sé: Cork and Donegal went out with the wrong attitude
5 Pele leads Maradona tributes: ‘One day, I hope we can play football together in the sky’
Real news has value SUBSCRIBE
Crossword Get access to over 6,000 interactive crosswords