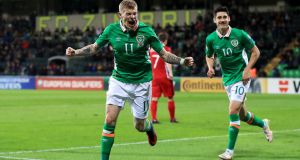 For a team that, even by their own manager’s admission, struggles to “wipe the floor,” this two-goal defeat of Moldova might be counted as a big enough victory. Certainly on a night when Wales and Austria failed to match Ireland’s results at home to Georgia or away to Serbia respectively, neither Martin O’Neill nor his players need be overly concerned that they played in patches and could not beat Moldova quite as convincingly as some of their Group D rivals.

For spells, it threatened to be another of those nights with Ireland surrendering their early lead through a moment of sloppiness and then struggling to reassert themselves following a really strong opening. But two goals in seven minutes from James McClean ultimately made the game safe with a quarter of an hour remaining and O’Neill will take some satisfaction from having been able to hand competitive debuts to Callum O’Dowda and Eunan O’Kane late on.

As expected, Wes Hoolahan was back from the start and his impact could scarcely have been much more immediate with the 34-year-old’s first touch of the game, a scuffed forward ball that McClean did well to control but his second, a couple of seconds later, was a perfectly weighted pass into space for Shane Long, who fairly coolly slotted his shot past Nicolae Calancea.

With most other teams, a goal so early might have been taken as early warning to opponents with a record such as Moldova’s that the goals were about to flow but it was impossible not to think here of how Ireland might manage to make life difficult for themselves. It took a while, but they found a way. In the meantime they looked comfortably the better side this time out.

The locals more or less matched them in terms of possession and actually completed more passes over the opening 45 minutes but they were expending a lot of energy to move the ball about with a bit of pace in midfield without ever really threatening to hurt O’Neill’s side. They were having to work hard too in defence to keep the Irish at bay with Hoolahan at the heart of his side’s better moves as he linked up especially well down the right with Séamus Coleman.

Hoolahan, though, gave the ball away more than once and when he lost out in a tussle with Vitalie Bordian just before the break, the right back stepped out wide and played the ball forward to his skipper, Alexandru Gatcan who in turn moved quickly to play his striker into space. The whole Irish defence had drifted too far forward but Shane Duffy looked to step beyond Igor Bugaev and got the timing wrong. Duffy never made up the yard or two his mistake cost him in the ensuing chase and the 32-year-old did rather well to put away his eighth international goal after having been pursued for 40 metres or so.

Having come in level, the players must have received another of the manager’s half-time specials but, if so, it had nothing like the effect of Thursday’s dressing down and Ireland continued to lose their grip on things for a while. Darren Randolph’s failure to deal more effectively with a floated free into the area presented Eugen Zasavitchi with the opportunity for a shot that Ciaran Clark blocked eight metres short of the line and for the spell after that it looked as if it might be anybody’s game, for it was open with both sides looking as though they wanted to push on and win it.

Ireland’s defending was less than completely convincing at times but with Glenn Whelan and James McCarthy reunited in central midfield, they continued to break up most of the Moldovan moves forward before they caused any great concern.

They continued to pass the ball fairly well too and there must have been the sense that they were capable of grabbing the goal that would put them back in control, at least until Long pulled up with what looked like a hamstring and had to go off. More than half of Ireland’s substitutes had not been been capped competitively and Adam Rooney was the only striker among them but O’Neill turned instead to 21-year-old O’Dowda who replaced McClean on the left as Walters took over the striker’s role and the Derrryman shifted over to the right.

All played some part as Ireland made the points safe in the spell that followed although McClean was clearly the star of the show. The West Brom player got his sixth international goal in the 69th minute when McCarthy’s weak shot arrived at the feet of Walters, who looked set to try to turn before realising his team-mate was better placed to shoot first time.

McClean poked that one into the bottom corner from six yards then volleyed a cross first time after Coleman had done really well again down the right. They pretty much cruised after that and were well worth a win that leaves them just off the top of Group D on goal difference.

Not at all a bad position to be in as they head to Vienna although the days of merely having to battle their way to wins over weak opponents are over now for a little while.