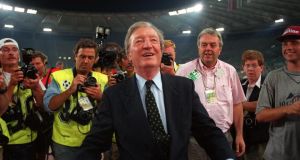 Charles Haughey walks towards the fans after the Republic of Ireland’s defeat to Italy in Rome. “I didn’t go on that trip no but he took a whole lot of people, including a lot of opposition people; he took Alan Dukes, I think, and De Rossa, they all went out on the government jet. It was a big story at the time.”

It was a momentous time for Europe, recalls PJ Mara, the Government Press Secretary when the map of the continent was being redrawn but even history making had to take a back seat for a while as the football sorted itself out.

“The Romania game was on one of the days that the European Council was meeting in Dublin,” he recalls, “and the Germans (still the West Germans back then) had come looking to get agreement on a lot of things relating to reunification but they suddenly found that it had become the second item on the agenda.”

They, of course, had something of an interest themselves in a tournament they would go on to win but a second round game between the Republic of Ireland and Romania can hardly have seemed like a particularly good reason to put their nation’s history on hold.

“Yes, Helmut Kohl and the Germans were very keen to get all the business in relation to reunification done but everybody just ended up watching the football. It was everywhere. I had my own quarters in there (Dublin Castle) with a television, there were other rooms with screens too and of course it was on in the media centre so everywhere you went there were people engrossed in it.”

The national leaders and their delegations around the complex and its meeting rooms could go with the flow, so to speak, or become exasperated by the hold-up but it would, Mara suggests, make no difference whatsoever and Kohl and co. knew better than to get worked up: “In the end,” Mara recalls, “the Germans didn’t really mind at all, they just went with it.”

Others, got more carried away: “Well, where there was John Healy, formerly of the Irish Times, of course, who was working with us at that time, he broke down in tears in the press centre; although I think it might have had more to do with brandy than it did with the emotion of the occasion but anyway, we won’t go into that.”

Later, he says, he found himself in the company of Fianna Fail TD Pat the Cope Gallagher as he delivered a message to a constituent; “He was one the phone to Packie Bonner’s mother, telling her what a great son she’d brought up and what a hero he was.”

A few days later, Charlie Haughey got fully in on the act, flying to Rome for the quarter-final game against Italy, a trip Mara missed out on.

“I didn’t go on that trip no but he took a whole lot of people, including a lot of opposition people; he took Alan Dukes, I think, and De Rossa, they all went out on the government jet. It was a big story at the time and you had all the prime ministers going, the same now you’d get Angela Merkel going down to Brazil. That’s just the way it was. But sure didn’t he win the Tour de France before that.”

As to whether the whole event helped to shape Ireland’s future, Mara acknowledges in might have helped lift spirits at a time that the country certainly needed cheering up. “I think there was a genuine feel-good thing alright. In 1990 things were just beginning to lift in the economy. I think people were beginning to get more hopeful so perhaps it was a bit of catalyst in that it did help the national mood what with all the people travelling, getting money from the credit union and all that.”