Side have excelled on counterattack but manager knows possession must improve 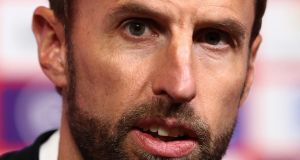 England manager Gareth Southgate goes into the next round of European Championship qualifiers this weekend having evolved his Lions once more. Photograph: Julian Finney/Getty Images

With a waistcoat rather than a donkey jacket, Gareth Southgate does not look like a radical. But the England manager can sound as if he has been cribbing from Karl Marx when he talks about his football team. There is a minute difference, rather than Marx’s “constant revolution” Southgate wants “constant evolution”, but the ultimate aim is the same: the conquering of state power by the proletariat (or winning the World Cup, whichever comes first).

Southgate goes into the next round of European Championship qualifiers this weekend having evolved his Lions once more. The absence of Kyle Walker, justified on the slightly unconvincing premise that Kieran Trippier needed to be reacquainted with the squad after 10 months’ absence, has been the main talking point. But there are other names missing too and, in total, only 11 players from the 2018 World Cup squad have been selected for the fixtures against Bulgaria and Kosovo.

In this case the evolution will be televised but what is it hoping to achieve? Straightforwardly Southgate has further rejuvenated his squad. The average age has come down by almost a year since the World Cup and the aim is to give players who are inexperienced at this level time to bed in before the Euros. (By the way, if that sounds a little bit presumptive, the chances of England not qualifying for next summer’s 24-team tournament are about the same as Graeme Souness being named chairman of the Paul Pogba fan club.)

“We’ve got to keep evolving as a squad and as a team” is Southgate’s view. “We’ve had a two-year period of progress and constant improvement, I think. But we can’t stand still and there are young players coming through that we might not see the best of in the next two years actually, but for the long term for England we need to start integrating them because I think this team can constantly improve and evolve.”

So players such as Mason Mount, James Maddison and Tyrone Mings will be put through their paces, exposed to all the motivational slogans of St George’s Park and welcomed properly into the England family. But does this evolution consist of more than just teeing up the next generation? There is reason to suspect it might.

It is not just the personnel that has changed dramatically during Southgate’s time in charge of the England team. When he first got his feet under the desk, England played a 4-2-3-1 formation with a number 10 – Wayne Rooney or Dele Alli at the time – expected to knit everything together in the style of the player England have never had since Paul Gascoigne (and never used in that way when he was around).

Just before the World Cup that system changed, to the famous and multi-hyphenated 3-1-2-2-2, which shored things up at the back a bit and asked two advanced midfielders – Alli again and Jesse Lingard – to facilitate the speedy transition of the ball (or alternatively themselves) to the final third.

Since those heady Luzhniki nights England have transformed once more. The shape is now a more familiar 4-3-3 with pace to burn on the wings and a balance of abilities in midfield. The landmark victory in this formation, the 3-2 win in Spain, saw a midfield three of Eric Dier as enforcer, Harry Winks as the passing metronome and Ross Barkley as the man with licence to progress with the ball at his feet.

England look likely to continue with 4-3-3 this season and into the Euros. There might well be a change in how it is played, however. The win in Seville, thrilling as it was, saw England register only 27 per cent of possession. There was a similar pattern against the Netherlands in the Nations League semi-final in the summer after Marcus Rashford’s opening goal. Between that penalty and Walker’s own goal in extra time, their opponents had almost two-thirds of the ball.

Possession may not be nine-tenths of the law in football, and England – thanks to the pace and skill of players such as Raheem Sterling and Jadon Sancho – are and will continue to be a powerful threat on the counterattack. But if this team are to keep evolving, then they need to up it in terms of possession and go toe to toe against even the toughest opponents.

That is where Mount and, in particular, Maddison come in. Southgate explained the absence of the Leicester man from his squad earlier this year as being because “I think he’s a No 10 and, at the moment, we’ve not been playing with a 10”. Asked last week about this, however, Southgate had changed his mind.

“He played as an eight in the summer for us”, Southgate said of Maddison’s not entirely successful under-21s campaign. “Mason can definitely play as an eight and equally off the wing as well. They’re [both] players of high technical ability who are going to threaten the goal.”

Alongside Phil Foden, Maddison and Mount make up a trio of players who have the skills of that mythical number 10, but are likely to be deployed in a more responsible way as a number eight in a midfield three. They can hurt the opposition with passes, they are effective shooters from range, they have the ability to carry the ball but, perhaps most importantly, they know – or will be expected to know – how to hold on to it. This would appear to be the next evolution of England.

Constant revolution has not arrived on the shores of the UK – not yet anyway – and constant evolution may also prove tricky. Southgate has set himself a high bar thanks to England’s exploits in Russia and he knows well enough that expectations at home will clear that mark next summer. Playing the youngsters will not provide any cover. England have a year to bed in new players and advance their style before a competition in which reaching the semi-finals would be par. The Impossible Job is back.

1 Ken Early: Mick McCarthy II was no blockbuster, more of a flop
2 Man City to investigate Kyle Walker over lockdown sex party
3 Cheltenham controversy will pass for magnificent triviality of horse racing
4 The Offload: Roll up for rugby’s very own horror film
5 Stephen Kenny in for ‘unprecedented’ first year as Ireland boss
Real news has value SUBSCRIBE
Crossword Get access to over 6,000 interactive crosswords