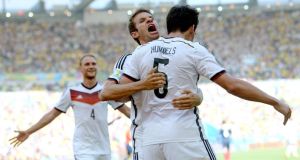 “Adieu les Bleus” sang some slightly giddy German fans before this first World Cup quarter-final and though some nearby French replied, as expected, with a famous chant of their own, it seemed their players simply had no answers when the three times world champions put it up to them out on the pitch.

Mats Hummels’ goal 13 minutes in was good but you’d have bet against it being the only thing between the sides at the end. Despite having had more of the ball and most of the chances during much of what followed, however, the French simply couldn’t find a way of saving themselves.

Didier Deschamps insisted afterwards that there “was not a big gulf between the two sides”, and to some extent he had a point. However, his side were ultimately beaten by stronger, more purposeful opponents. The difference between the teams, it seemed at the end, was that the Germans knew how to win and did it well.

“The Germans have experience, they know what it is to be at this stage of the competition; that was what separated us today,” added Deschamps.

Joachim Löw didn’t deny the importance of his side being filled with players who know what it is to play on a big stage. “Some of them have already won the Champions League,” he said and “we have made it before to the semi-finals in the last five tournaments; it is a fantastic achievement”.

However, though his side showed fierce resilience here, it is still far from certain that they are world champions in waiting.

Both managers made changes with Löw relenting and switching Philipp Lahm to right-back. More surprising and less successful, perhaps, was the inclusion of Miroslav Klose up front, but the veteran striker worked hard.

Deschamps placed his faith in Karim Benzema over Olivier Giroud and just when it really mattered, the Real Madrid striker’s goalscoring touch deserted him. He had chances here – plenty of them – but a combination of poor finishing and a desire to take too many touches proved costly.

Late on, he was one of the few French players who looked like he appreciated the team’s plight and he did finally force Manuel Neuer into a decent reaction stop with a shot from a tight angle. But it was always going to take more than that to keep France in the tournament.

The closest the French came to scoring, though, was in the first half when Mathieu Valbuena got onto the end of Antoine Griezmann’s cross from the right and saw his shot stopped well by Neuer. “It’s insanely good,” said his coach, “for a defence to have a goalkeeper that good behind them.”

On that occasion Benezma’s follow-up was turned over rather easily by Hummels while a clearcut heading opportunity minutes later was directed straight at an opponent.

By then, Hummels had provided a lesson in how such situations should be handled. After a sluggish start, the game was almost a quarter of an hour in when the Germans were handed a free for a foul on Tony Kroos. Mesut Özil floated it in perfectly and the big centre half brilliantly kept the Raphael Varane at bay as the soared into his rival’s space and sent a glancing header beyond Hugo Lloris and into the top left corner.

It was hard-nosed stuff and there was plenty more where that came from, with Bastian Schweinsteiger and Sami Khedira both dishing out some rough treatment to more creative opponents.

It was relentlessly impressive, though, and despite getting caught out on a handful occasions by angled balls over the top for Griezmann or Benzema to run onto, the Germans looked more solid than they had in recent games.

The French certainly passed the ball well, at least until the closing stages when their composure deserted them and Paul Pogba, Yohan Cabaye and Valbuena were amongst those to have their moments. At critical moments, though Griezmann’s close control let him down.

The Germans might easily have doubled their lead towards then end as Thomas Müller and Andre Schürrle began to make the most when breaking into the vast spaces as the French went in search of an equaliser.

Hugo Lloris made a good save on one occasion and Müller failed to connect when he looked set to score on another. It mattered little, however; they march on and the French say goodbye, much as might have been expected. The rest of us are left to wonder whether Löw’s side will fold as easily this time as they did last when they finally come up against a genuinely good team.