How would relegation affect Ireland fans and players? 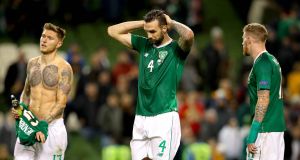 When you are manager of an international football team sometimes anything you do is the wrong thing. As Berti Vogts observed: “If I walked on water my accusers would say it is because I can’t swim.” Yet however bad things got during Vogts’ disastrous tenure as Scotland manager, the German could at least console himself with the fact that the one indignity he could never suffer was relegation.

Times change, and this week for the first time 13 European countries will be relegated from the Uefa Nations League. In the absence of an improbable victory away in Denmark one of the nation’s reluctantly making history will be the Republic of Ireland. Northern Ireland are almost certain to make the same downwards journey from League B to League C, helpfully obviating the need to negotiate any kind of backstop agreement so as to maintain a level playing field on the island.

Despite its myriad of other failings, Fifa deserves credit for firmly enshrining promotion and relegation in its rulebook for domestic championships and currently the only two “closed” leagues are the A-League in Australia and the Major League Soccer in the USA.

Everywhere else the rise or fall of clubs through divisions is based on performance in matches, irrespective of wealth or history. As a result, England may be the only county to have five clubs who have been crowned champions of Europe but two of this elite group no longer play in the Premier League.

Fifa has also moved quickly to close any loopholes as occurred in Spain in 2007 when the wealthy owner of a fourth division Granada club effectively managed to buy promotion. He did this by purchasing a second division team based in Murcia and then immediately moved them geographically and re-established them as Granada 74.

The most depressing revelation about the plans for a European Super League that were recently leaked to German magazine Der Spiegel was the proposal that its members would be picked for their “television presence” and that, as “founding members”, 11 of the 16 teams competing in the league would be absolutely protected from relegation for 20 years – a reassurance denied to the other five “initial guests”.

Despite being described by Jürgen Klopp as “the most senseless competition in the world” and having a complicated format, the Nations League has actually been a huge success, with the Republic of Ireland’s games against Wales and Denmark having a real edge to them.

The fact that the managers were limited to three substitutions avoided the endless sequence of second-half replacements that usually drain any remaining energy out of non-competitive games.

In addition, because Nations League groups are made up of teams of similar ability and because each League winner qualifies automatically for Euro 2020, the weakest teams in Europe now have a realistic path to qualifying for major tournaments for the first time.

One would need a heart of stone not to celebrate the fact that last month Gibraltar, who had never previously won a competitive match, managed to win two of them within four days.

The manager of Liverpool is entitled to remain apathetic as to who eventually wins League D, but for the four countries who make the play-offs (currently Kosovo, Luxembourg, Georgia and Macedonia) the achievement is likely to rank as the finest in their footballing history.

Whilst the introduction of relegation into international football is long overdue, it does have hugely adverse consequences for the Republic. For one thing we will now be third seeds when the draw for the Euro 2020 qualifying groups is held in the Convention Centre in Dublin on December 2nd, making qualification harder.

Bearing in mind that four tournament matches are being played at the Aviva Stadium (three group games and one Round-of-16 encounter) this raises the nightmare possibility of the Republic not securing an invitation to a party that we are co-hosting.

If the Republic of Ireland are relegated then when the next Uefa Nations League starts in late 2020 they will be in League C.

Now, it is hard to work out what the current demand for Ireland tickets is as the FAI tends to talk somewhat euphemistically about tickets having “gone out” for matches rather than having being sold amid suggestions that thousands of tickets are being given away.

But if the bean-counters out in Abbotstown are finding it difficult to sell tickets for League B matches against Wales and Denmark, one can only imagine how they will feel about attempting to fill the Aviva for League C encounters with the likes of Cyprus and Montenegro.

Admittedly, national soccer associations raise most of their money through television, but the value of these rights is also open to fluctuation.

At the moment the Republic’s home and away qualifying games in both the European Championships and the World Cup are “listed” events which must be broadcast live on free-to-air television. However, the legislation appears not to have been amended to extend this requirement to cover the Nations League.

This means that Ireland is now playing competitive matches which are only available live on pay television. This may be agreeable to the match organisers who can extract a much higher price when the market is open to Sky and other satellite broadcasters. However, it is unfair on those committed fans who cannot attend matches or pay for subscription television, and who are thereby cut off from live coverage of potentially crucial Ireland games.

Playing League C matches in front of paltry crowds will also test the motivation levels of our players who, when relegated at club level, can immediately instruct their agent to find them a new team. This escape route is not available to international footballers who (with the possible exception of Declan Rice and perhaps Michael Obafemi) can only play for one country.

The other great thing about the Nations League is that it has rendered the concept of the international friendly largely redundant, thereby preventing the FAI from arranging a series of meaningless encounters against the likes of Oman. And who can complain about that?

1 Timo Werner giving up on Liverpool dream on path to being truly wanted
2 Ian O’Riordan: An education in race and running during college days in America
3 Mature Ringrose keeping the ups and downs of rugby life in perspective
4 Sideline Cut: Marcus Rashford proves himself a leading man off the pitch also
5 Tianna Bartoletta: ‘After you’ve gotten your medal, you become black in America again’
Real news has value SUBSCRIBE
Crossword Get access to over 6,000 interactive crosswords