Hard to take offence at Jack Grealish’s decision to wait 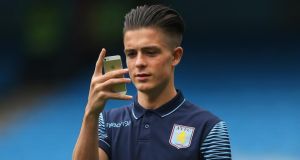 Even now, after so many attempts to get them right, the Fifa rules that govern international eligibility are an imperfect attempt to address an intractable problem.

Still, we Irish haven’t done too badly out of them down the years, and we shouldn’t cry too much when a young player decides to take his time to weigh up the options they afford him.

Somewhat inevitably, Jack Grealish was taking a bit of stick on social media over his decision to decline Martin O’Neill’s offer of a call-up to the senior Ireland squad but it’s actually difficult to see how anybody could reasonably take offence.

The suspicion is that the 19-year-old, having started to really deliver at the top level on all that promise, is waiting to see whether he might get the offer of an England cap.

Yet if that is what, deep down in his heart, he wants, then who really has the right to complain?

Until it happens, and it is far from certain ever to happen, O’Neill’s job will be to continue to court a player who has something to offer Ireland.

In the meantime the manager pretty much dismissed the suggestion yesterday that Grealish’s motives might be as basic as wanting to see how the qualifying campaign pans out or that he is the victim of pressure from his club or agent, both of whom might be expected to prefer the idea of having an England international on their books.

In a perfect world that sort of heart-felt desire might well be the only thing that really mattered when it came to defining eligibility.

As it is the rules were designed with post-colonial nations like our own very much in mind.

The last reshaping of the regulations was prompted by a handful of north African nations upset at the number of young French-born players whose ability to declare for the homelands of their parents or grandparents was being ended by early international appearances that led nowhere.

Yet long before the current rule was drawn up the FAI had shown itself adept at exploiting the previous versions, and while a few of the resulting stories regarding some of the players who were recruited would not exactly bring a tear to the eye of a patriot, very few fans ever seemed to care all that much once the matter was settled and the footballer good.

The likes of Kevin Kilbane, Lee Carsley and Mick McCarthy were committed to the cause long before they were a celebrated part of it. Yet there were some such as Andy Townsend who cheered on England against Ireland at Euro’88 while on holidays in Spain. Within a year he was an Ireland international, and within 10 he had played some 70 times for the country.

Like quite a few others who might be accused of seeing the Tricolour as a flag of professional convenience, of exploiting the rules, the experience always seemed to have had a profound enough effect and the very least you might say is that the relationship was mutually rewarding.

More recently the team has benefited from a peace settlement in the North that has made it far more acceptable for players from the nationalist community there to declare for the Republic, as well as the absolute determination of a couple of Scottish-born stars to play for Ireland when their decision was seen as an affront by many fans there.

In the future the parameters of the situation as it applies here are set to shift again with the “new Irish” population set to throw up some of the next generation of Ireland internationals.

Players like Avis Ganiyu, Jean Yves Poame, Noe Baba and Zachary Elbouzedi (who may feature for Tom Mohan’s side against England at the under-17 European Championships today in Bulgaria) have all represented Ireland at youth levels, and will hopefully go on to win senior caps.

If, after growing up in Ireland, any of them feel that their first loyalty is to another nation then it would seem natural to ask why.

They, like so many English-born Irishmen, will be perfectly entitled to make the call but if their decision is based on any sense of alienation that is prompted by their ethnicity and Irish society’s attitude to it then that would be something to actually get upset about.

In the meantime, an English-born player, one that previously rebuffed approaches from the FA there because he was capped first for Ireland and appears to have wanted to repay that honour with a measure of loyalty, has said he wants to take some time now to consider what must be one of the biggest decisions in his life.

Every Irish fan will, like O’Neill, hope Grealish ends up playing for Ireland. But, first and foremost, we should probably just wish him well.