Grealish happy to stay in green for nights like these 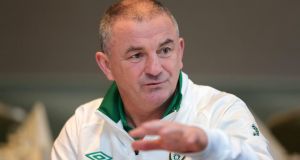 Ireland Under-21 manager Noel King stepped in to assure Jack Grealish he was part of his plans. Photograph: Inpho/Morgan Treacy

Jack Grealish admits he rejected England to stay part of major Republic of Ireland occasions like tonight’s qualifier against Germany.

The Aston Villa winger, 17, declared for Ireland three years ago but was offered the chance by the English FA earlier this year to switch to his homeland.

Their approach to Birmingham-born Grealish came after the winger didn’t get a minute of action for Ireland’s Under-19’s last October in three Uefa first-phase qualifiers.

However, Ireland Under-21 manager Noel King stepped in to assure Grealish and his family that he was an integral part of his plans. That was then proven last month in the Faroe Islands when King made Grealish the youngest player to be capped during his three-year tenure.

Sceptics may describe Grealish’s two-minute cameo in Totfir as a ploy by Ireland to block him switching to England but he can still do so in future Under-21 campaigns.

Still, the player insists he wants to stay in the Irish fold. Grealish, who was on the Villa first-team bench at 16 for the Premier League game against Chelsea, would love an early birthday present by featuring against Germany tonight.

“I turn 18 on Tuesday, so another Ireland cap would be nice way to celebrate,” said the youngster, who scored for Paul Lambert’s first-team in pre-season against Walsall.

“I made up my mind a few months ago that Ireland was the best for me and I’m happy with the decision.

“It was disappointing not to play any of those Under-19 qualifiers last season in Luxembourg but it’s a team game and the main thing is the lads got through to the next round.

“I didn’t know what was going to happen after that but I thought about it and didn’t want to switch.

“My Under-21 debut in the Faroes was the first time in over a year that pulled on that green jersey. That made me feel very proud.”

Grealish is pushing for a starting place in Ireland’s first home qualifier of the campaign. They made a solid start by beating the Faroes 4-1, a three-goal margin the Germans replicated in their opener in the North Atlantic.

King lost Derrick Williams (Bristol City) and Frankie Sutherland (QPR) from his squad to injury over the weekend.