Gilesie lucky to miss out on ugly war of attrition 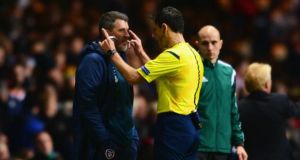 We knew the day had to come, but still, it didn’t stop us dreading it. Finally, management decided, for this encounter at least, and with the nature of the opposition in mind, that they needed a bit more energy and muscle in the line-up. A monster decision, one we dreaded after so many years of fond memories and sparkling moments, but one we saw coming, if we’re honest about it.

The decision was, said Liam “Spock” Brady, “logical”, while Eamon Dunphy said it was “the right call, a brave call”. But after some initial shock at their disloyalty to their long-time sidekick, you realised they were actually talking about the Robbie Keane business, not the benching of Gilesie in favour of Richie “The Kid” Sadlier.

Risky? Certainly. And no offence to The Kid, who has added a certain je ne sais quoi to the team, an incisive mind and outstanding decision-making, with a bit of the hurly-burly and sharp elbows thrown in. Granted, Liam and Eamon have often refused to pass the ball to him, and vice versa, which is never ideal among team-mates, but his inclusion was perfectly understandable.

But would we pay for Gilesie being rested for the game, thereby removing all moral courage and concerns about the impact of Playstations on today’s young players from the panel?

Come half-time, after 45 minutes of football that might have had Lionel Messi asking “What. The. Hell. Was. THAT?”, you missed him, he being one who regards the failure to keep possession of the ball as a crime as grave as anything ever judged by the crowd in The Hague.

Although Liam’s analysis (“Frantic, hectic, blood and guts, [sigh]”) of a spell of possession-losing head-tennis was Gilesie-esque, in a “good gawd almighty” kind of way, as was The Kid’s conclusion that this was a “really fast, low-quality local derby”, so there was a little bit of his spirit still in the studio.

Lionel would have been right, it wasn’t totally football, but it was fabulous, if “who do you think will be sent off first?” is your kind of thing.

“Bagpipes and kilts and lots of Irish people,” Tony O’Donoghue had said, setting the scene in Glasgow, and when Amhrán na bhFiann started off you knew it was a home game.

But then Flower of Scotland followed and you sensed there were some Scottish people in the stadium too.

A draw, then. Which is what The Kid forecast, Eamon opting for “I don’t think Ireland will lose”, while Liam reckoned Ireland would depart Paradise with all three points in the bag.

By then, we saw a smiling Robbie arrive at the ground, before being taken in to a room by Martin O’Neill where he was informed he’d be Gilesie-ised. And, then, all through the game we saw lots of shots of himself and Shay Given on the bench, which was a sure-fire way to make you feel creakily old. Where have the years gone, like?

“It seems very much like a Celtic family outing,” George Hamilton told us, lest we were worried about argy-bargy, but then the locals were quite rude to Aiden McGeady, which came as a total surprise, the abuse having not been flagged during the week, so you could only hope their next haggis be putrid.

There was much focus from the panel on Ikechi Anya, Liam ensuring there won’t be a warm welcome for him at Vicarage Road next time around after noting that “if he was a top, top player he wouldn’t be playing for Watford”, but Eamon was impressed by “Enya” and his ability to sail away past any form of Irish marking.

The second half was marginally less pretty than the first, Gilesie Keane unbenched to save the day after obvious Irishman Sean Moloney gave Scotland the lead (or ‘Shaun Maloney’, as his birth cert erroneously states), by then Chris Martin parachuted in to the game as a replacement for Steven Fletcher, at which point you thought their goal threat was done and dusted.

All over. Paradise Lost.

“It was the ugliest game of football I’ve seen in a long time,” said The Kid, and Gilesie would have been proud.

Except he might have added: “I’ve seen more moral courage in a pineapple.”