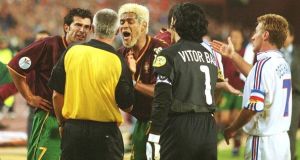 Abel Xavier protests after he gave away an extra time penalty in Portugal’s Euro 2000 semi-final against France. Photograph: Getty

Abel Xavier, and his peroxide blonde hair and beard, first roared into the consciousness of international football fans at the European Championships in 2000.

The only man to play for both sides in the Merseyside derby in the same season and the current manager of Mozambique, Xavier had joined Everton from PSV in 1999, but it was in Holland and Belgium where he really made a name for himself - and his barnet.

Xavier was an integral part of the back four of the Portugal side who beat England, Germany and Romania to top their group before seeing off Turkey in the quarter-finals and setting up a last four date with France.

Nuno Gomes had given the Portugese a 1-0 lead against the world champions before Thierry Henry levelled things early in the second half, and with neither side able to edge in front, Xavier nearly stealing it with a 90th minute header, the game in Brussels went to extra time - with the dark spectre of the now defunct golden goal looming over both teams.

With just three minutes to go David Trezeguet had a chance smothered by Portugal goalkeeper Vitor Baia, and Sylvain Wiltord followed up only to see his effort blocked by Xavier’s hand at the near post.

Referee Gunter Benko awarded a penalty under the orders of linesman Igor Sramka, and Portugal lost the plot.

It took three minutes before the Portugese could be calmed down and Zinedine Zidane could take his penalty, during which time Luis Figo had taken his top off in protest before returning to watch Zidane send France through to the final.

But Portugal’s protestations didn’t stop there, with Nuno Gomes being sent off and Paulo Bento having to be restrained as he attempted to get to Sramka. Even the legendary Eusebio could be seen trying in vain to calm down his enraged compatriots.

And at the heart of it all was Xavier who hardly looked the most inconspicuous of characters as he berated the officials. He was handed a nine month ban from football for his troubles, which was eventually reduced to six.

1 Sideline Cut: Vignette shows why Bird is the true shark in The Last Dance
2 Coming fourth in the Olympics didn’t change this fearless quartet, time did
3 GAA preparing for earlier return to activity but pitches to remain closed
4 Brendan Rodgers says he was ‘really knocked’ by coronavirus
5 Anfield and Cheltenham show sports again lacking in looking after their own
Real news has value SUBSCRIBE
Crossword Get access to over 6,000 interactive crosswords