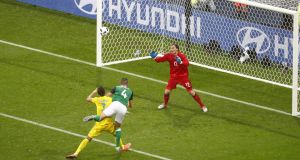 Going buck daft. That’s the kind of phrase you hear on the streets of Larne and presumably they were going that way in the Co. Antrim port as Northern Ireland recorded a dramatic, thrilling and deserved victory over Ukraine - and Larne man Gareth McAuley scored the goal that set it up.

Then gloriously, uproariously, Niall McGinn stroked in a second seven minutes into injury-time to ensure the Irish had all three.

McGinn, a substitute, had his chance created by another one, Josh Magennis, on an evening when every bold decision made by Michael O’Neill, and there were quite a few, paid off.

The result was Northern Ireland’s first win in a major tournament since Gerry Armstrong’s famous goal beat Spain in 1982. This was historic.

Having looked so uncomfortable in defeat by Poland in Nice on Sunday, suddenly O’Neill’s players look like they belong in Euro 2016.

O’Neill said on Wednesday that he felt that way, but he needed his team to prove it. The Irish barely put a foot wrong in a game interrupted in the 58th minute by a hailstone shower of such ferocity the Czech referee took the players off.

It was all part of a drama-filled 90 minutes, one which saw a heart-warming minute’s applause for Darren Rodgers, the Northern Ireland fan who died in Nice after the Poland game. And there was further heartbreak when it was revealed a second travelling fan had a heart attack in the stands and died.

The players were oblivious to that. They were focused on reminding themselves and the rest of Europe that they had won Group F in qualification and deserved to be here.

Washington was one of five changes O’Neill made from Nice, replacing leading scorer Kyle Lafferty.

That was a huge call by the manager, as was the change of formation from a back three to a back four, one that included 36 year-old Aaron Hughes, whose last competitive match was for Melbourne City in January.

But O’Neill had faith that Hughes could deal with Yehven Konoplyanka and he placed Jamie Ward in front of Hughes. The Nottingham Forest man was excellent, part of a collective attitude that contrasted totally with the anxiousness of Nice.

Then Northern Ireland struggled in the humidity; here they thrived in the cold rain of Lyon.

From the opening ten seconds the players were revealing a different attitude. Ukraine’s kick-off saw Washington and Davis harry the opposition into an error.

This was the aggressive, spirited running which had been missing in Nice.

In the fourth minute Stuart Dallas had a shot and although it was another half hour until Craig Cathcart headed narrowly wide from a Ward corner, that intervening period had not been dominated by Ukraine.

Andriy Yarmolenko was anonymous, but then nearly all Ukrainian attacks were snuffed out by a green line supported by another green line.

As the rain came down McGovern’s handling was assured, not that he was needed much in the first half. It came to a close with the inspirational Davis testing Ukraine keeper Andriy Pyatov from an angle.

Northern Ireland were settled. There was a brief worry when Yehven Seleznyov headed wide at the start of the second half but sixty seconds after that came McAuley.

The Irish excel at set-pieces and Norwood’s delivery is a vital part of their rise under O’Neill - as are those of the absent Chris Brunt.

Norwood curled in a fast dead-ball that cleared all in the middle but which was met by McAuley charging in at the far post. The West Brom defender climbed above Yevhen Khacheridi and planted a head-butt header back across and beyond Pyatov.

The estimated 16,000 Irish fans in Lyon’s bowl went berserk. The goal had come directly in front of where most of them were massed. What a moment, an Armstrong moment.

Now it was about making sure they got at least a point, to make Germany in Paris on Tuesday meaningful.

Ukraine came at them but McGovern made a fine 89th minute save from Konoplyanka and by then McGinn was on. So, too Magennis - but not Lafferty.

There were six minutes of added time but there was no suggestion that Northern Ireland would concede.

Instead Magennis skipped past his man on the right and crossed accurately for Dallas. His shot was parried by Pyatov but it fell to McGinn. Looking sharp, the Tyrone man hammered in the rebound.

Cue an explosion of players and staff from the Irish bench. They went buck daft.

1 European clubs must take lessons from financial demise of former greats
2 Munster braced for worst of financial crisis due to Thomond Park debt
3 Seán Moran: Horan’s cautious approach under growing pressure
4 From history to food: Players take chance to focus on life after rugby
5 Coming fourth in the Olympics didn’t change this fearless quartet, time did
Real news has value SUBSCRIBE
Crossword Get access to over 6,000 interactive crosswords