Euro 2016: Farewell to France and ‘le buzz’ as dream ends 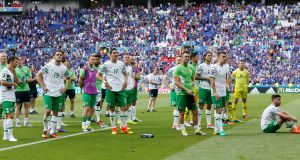 For a dizzying hour in Lyon, it looked as if we were heading to the quarter-finals of Euro 2016, with the tournament hosts in our wake and – most likely – a game with England to come.

Then, as happens to tournament Cinderellas, the wheels fell off our carriage.

Robbie Brady’s early penalty was obliterated by two bolts of Antoine Griezmann lightning in quick succession. And, after Ireland had Shane Duffy sent off minutes later, only the team’s courage and a bit of luck kept the final score at 2-1.

But if there was a question of scheduling in the end of this fairytale, it did not involve a clock striking midnight. More relevant, probably, was the week’s rest France enjoyed before the game, compared with the three days Ireland had to recover from their heroics against Italy in Lille.

Even when still leading yesterday, it was a tired-looking Irish team that emerged for the second half. With 11 men, nevermind the 10 they finished with, they were run ragged by a French team roared on by the vastly superior home support – another equation in which the organisers clearly favoured the hosts.

So it must have been doubly shocking for them when, midway through the first half, the heavily outnumbered Irish were making most noise in the stadium, encouraged by a team that looked more likely to extend the lead than let France equalise.

A second goal might have broken the home team’s resolve, as well as testing the affection so many locals had expressed for their visitors.

But it didn’t happen, and for some Irish fans, who had already extended trips and spent up to €700 on tickets for yesterday, the Euro 2016 exit will have its mercies.

While both Irish teams go home with heads held high, their fans’ popularity ratings abroad are now at least as elevated.

One of many admiring newspaper features during the tournament, in Lyon’s Le Progrés yesterday, declared it a draw between their respective talents for creating atmosphere. But it suggested that where the Republic’s fans had an edge over the North’s was in their genius for self-promotion: recording all their own heroics on YouTube and, in general, creating “le buzz sur internet”.

Well we hope it helped, France. But we have to get back to our own problems now.

Our work here is done.