Euro 2016 draw: It cannot be as tough as last time out for Ireland 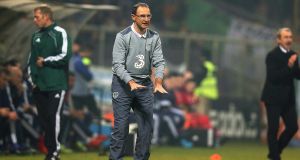 Republic of Ireland manager Martin O’Neill: As fourth seeds, Ireland could be assigned any one of 18 schedules when the draw for Euro 2016 takes place in Paris. Photograph: INPHO/Donall Farmer

Republic of Ireland manager Martin O’Neill says he is far more relaxed about this evening’s draw in Paris for the finals of the European Championship than he was for the qualifying draw that landed his side with Germany, Poland and Scotland.

O’Neill insists that it is not a question of the pressure being off now that he has achieved his primary objective of getting this Ireland team to the finals, but, he suggests, the prospect of not getting his side here was certainly on his mind as he watched the scale of the task being revealed in February of last year.

“It’s totally different to the draw in Nice where I was apprehensive about it, concerned about being drawn against Germany and Poland, who were very decent, a resurgent Scotland, ourselves, dark horses in Georgia – we weren’t sure what to expect there.

“Germany were almost certain to win the group; that was narrowing things down. So, this time around, we have qualified. I will give it a lot of thought, but I am going there with a freer mind, whoever we get.”

Asked if he would like to see his side drawn against England, the 62-year-old says he doesn’t have “a problem with it”, but adds: “I’m going with the feeling, ‘okay, all right, whatever will be, will be’. That’s how I feel.

“I thought at one stage when the draw came out for the playoff matches, ‘don’t get Ukraine, don’t get this, don’t get that’, but then you think: ‘Well, who do you want?’ And it fell to us, Bosnia, top 20, and we were able to knock them out.”

“Like everything else,” he says, “because we went through the playoffs, other people might have booked things. Holland booked way back, years in advance, and they never made it, so I am delighted to be there, but we will know after the draw whether we are north or south.

“I think back to 1982 with Northern Ireland,” he says. “We were based in Valencia, but we had only one game in Valencia. They felt that the hotel was good, which it was, and the facilities, which weren’t too far away, weren’t too bad. But on the morning of the games we had to travel by plane, to Zaragoza, for the two matches we had there, and it was a really hot summer.

“Nowadays, I think you have to be ensconced in the area 24 hours before the game, so that makes a difference. I think if you’re not a million miles from an airport you will be okay. But, of course, with security and such things, there might be added pressure, so let’s see how the draw works out and where we are.”

O’Neill might play it down, but the outcome of today’s draw will be critically important to his side’s chances of avoiding the sort of fate suffered by Giovanni Trapattoni and his men in Poland three years ago. As fourth seeds, Ireland could be assigned any one of 18 different schedules next summer, depending on which group they are drawn in and whether they are designated as that group’s second, third or fourth team.

Both draws may have a significant bearing on their fortunes, with some groups having the advantage of ostensibly more favourable second-round ties for qualifiers, while some of the schedules bring with them geographical advantages in terms of the amount of travelling to be done or likely local temperatures.

Whatever challenge is presented, though, O’Neill’s confidence is bound to have been boosted by the manner in which his side negotiated its closing four group games and two playoff games. Previously, the team had been, as they were under Trapattoni, generally hard to beat, but with their backs to the wall they discovered a long-lost ability to win really big games.

The victories over Germany and Bosnia and Herzegovina ultimately eclipsed anything achieved under O’Neill’s predecessor and the performances turned in by Ciaran Clark, Richard Keogh and Jeff Hendrick, in particular, provided reassurance that this squad is better equipped to cope against the sort of qualitythey are likely to face in France than the Italian’s was in Poland.

Daunting Trapattoni, to be fair, was handed a genuinely daunting task in his finals draw, but the tactical conservatism that had helped Ireland put together long unbeaten runs through his first four years in charge was always going to be a major problem once the team were beaten by Croatia at Euro 2012.  Getting out of the group without a win was always unlikely, given the format in 2012, and Ireland were hopelessly ill-equipped to beat either Spain or Italy.

This time, with four third-placed teams going through, it is a somewhat likelier scenario, but Ireland, in any case, simply cannot get as tough a group . The players, too, have shown that on their day they can beat decent sides; and in more than one way.

O’Neill’s squad will be substantially different from the one selected by Trapattoni, with nine of the Italian’s 23 having departed or drifted so far to the margins that inclusion is almost unthinkable. Roughly the same number are on course to travel again, while a handful will be sweating between now and the summer

The goalkeeping situation is particularly interesting. A couple of others have made squads over the past few years, but essentially it looks to be a case of three from five, and with none of those who appear to head the queue at this stage playing for their clubs, it is hard to say with any degree of certainty who will be in pole position by the end of the season.

Darren Randolph has done pretty much all that could have been asked of him since coming on for Shay Given against Germany, but we have yet to see whether the manager will revert to the veteran when he has that option.

Either way, as third choice now, David Forde’s position would surely be vulnerable in the event that Rob Elliot or Keiren Westwood continue to play and do well for their clubs

In defence, O’Neill’s hand looks significantly stronger now than it did in the summer, thanks to the heroics of Keogh and Clark against the Bosnians. The latter has been one of the few players at Aston Villa to do well over the course of the league campaign, but there will be concern that his confidence might be knocked if the team cannot show some overall improvement over the course of the season’s second half.

Both were important in terms of Ireland’s ability to pose an attacking threat, but the question of who might score Ireland’s goals still lingers. Brady, like Wes Hoolahan, got just one in qualifying, and with Robbie Keane getting all of his five against Gibraltar, Jon Walters has emerged as the most likely candidate.

The Stoke City striker was the hero of the playoffs, perhaps of the campaign, but his precise role at the finals may well be influenced by who around him prospers at club level between now and then.

Certainly Shane Long could do with improving on the 12 games in which he has featured for Southampton so far this season. Throw in his international numbers and he has seven goals in 17 outings, with the efforts against Germany and Manchester City providing reminders of just how brilliant he can be when at his best. Two of his goals came against MK Dons, however, and there have been some terrible misses too, with confidence perhaps a factor.

For players such as Stephen Ward, Marc Wilson and Aiden McGeady – who has played only 94 minutes of competitive football for club or country since the start of the season – re-establishing themselves as regular starters is of more fundamental importance, with fitness a key issue going into such a demanding run of games, as O’Neill made clear this week.

“I think this becomes an important issue,” he said. “And I think that the players realise this. I can’t go into the summertime carrying players who’ve maybe played two or three games, or I certainly can’t carry a host of players doing that.

“People like McGeady have to play. Absolutely. Darron Gibson needs to play. We’ve got a number of players who need to play who have got the potential to be here.”