England and Scotland players to defy Fifa by wearing poppy 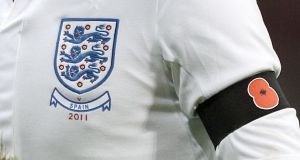 A file picture from 2011 of an England player wearing a black armband with a poppy symbol. Photograph: Nick Potts/PA Wire

England players will wear black armbands bearing poppies in the November 11th World Cup qualifier against Scotland, despite Fifa general secretary Fatma Samoura’s insistence that no exceptions would be made by the world governing body.

The game’s laws state that players’ equipment should not carry any commercial, political or religious messages, and Fifa has stuck to its guns, with Samoura earlier on Wednesday evening warning Theresa May not to interfere after the British prime minister labelled the world governing body’s stance “utterly outrageous”.

But the English Football Association then issued a statement confirming its Armistice Day tribute.

It read: “We fully respect the laws of the game and take our founding role on the International Football Association Board (Ifab) extremely seriously. The poppy is an important symbol of remembrance and we do not believe it represents a political, religious or commercial message, nor does it relate to any one historical event.

“In keeping with the position agreed with Fifa back in 2011 and in what we believe is in accordance with law 4, para 4, the FA intend to pay appropriate tribute to those who have made the ultimate sacrifice by having the England team wear black armbands bearing poppies in our fixture on Armistice Day.”

England, Scotland and Wales players wore poppies on armbands in three November friendlies in 2011 as part of a compromise granted by Fifa.

The FA asked Fifa for a similar ruling this year but received a short written reply from Samoura that “drew attention” to law 4, paragraph 4 – the section that contains the ban on commercial, political or religious messages.

The FA and its Scottish and Welsh counterparts had hoped to persuade Samoura to soften her stance at a dinner in London on Wednesday evening, before Thursday’s meeting of the Ifab, the body that makes the game’s laws.

But in an interview with the BBC before that dinner, the former United Nations diplomat appeared to end any prospect of a settlement.

Referring to Ifab, which is comprised of the four British FAs and Fifa, Samoura said it “represents 211 member associations and each of them will be also ready to ask for similar exceptions”.

The Senegalese official said she had already been approached by several FAs asking for their own one-off exemption so they can make similar statements but had said no because the laws must be applied “uniformly and across the 211 member associations”.

When asked if an exception could be made for an act of remembrance, Samoura remained defiant.

“You could make many exceptions. Britain is not the only country that has been suffering from the result of war,” she said.

“Syria is an example. My own continent has been torn by war for years. Why are we doing exceptions for just one country and not the rest of the world?”

Fifa’s position has already provoked an angry response from the British media, politicians and veterans groups, with May joining the fray in Wednesday’s prime minister’s questions.

May told MPs: “I think the stance that has been taken by Fifa is utterly outrageous.

“Our football players want to recognise and respect those who have given their lives for our safety and security. I think it is absolutely right that they should be able to do so.”

She added it was a matter for the British FAs but there was a “clear message” from the Commons that “we want our players to be able to wear those poppies”.

And in a direct message to the Swiss-based governing body, which has been plagued by corruption allegations, May said: “Before they start telling us what to do, they jolly well ought to sort their own house out.”

The FA has tried to keep negotiations open since the story broke on Monday and has been optimistic it could win Fifa over, particularly given the 2011 precedent and the fact this year marks the 100th anniversary of the Battle of the Somme.

But, as Samoura’s remarks confirm, the new regime at Fifa – president Gianni Infantino has only been in place since February and Samoura was appointed in May – is determined to keep politics out of the game, as much as possible.

FA chairman Greg Clarke earlier gave a strong hint as to what was likely to happen next Friday.

When asked by the BBC if the British teams would be punished, Samoura was vague.

“It is not really my ambition to punish anybody. They just have to recognise they are part of the rules of the game and they should be ready to face any kind of sanctions,” she said.

“They know better than me because they made the law.”

She added that it would be up to the match commissioners – Fifa’s representative at international games – to make a complaint. A decision on punishment, which could be a points deduction, would be made later by a disciplinary panel.

When asked if she had a message for the prime minister, Samoura said: “No message to her. I would just ask anybody to refrain from political interference.”

Shortly after the FA’s statement, its Scottish counterpart issued an almost identical statement of its own to say Scotland players would also wear armbands.

After echoing the FA’s position regarding the Ifab and the non-political nature of the poppy symbol, the statement concluded: “In keeping with what we believe is in accordance with law 4, para 4, the Scottish FA intends to pay appropriate tribute to those who have made the ultimate sacrifice by having the Scotland national team wear black armbands bearing poppies in our fixture against England on Armistice Day.”