Croatia through to quarter-finals after penalty shootout with Denmark 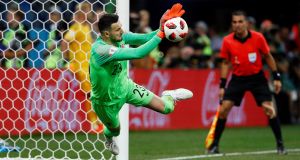 Croatia’s Danijel Subasic saves a penalty from Denmark’s Lasse Schone during the shootout in the round of 16 game at Nizhny Novgorod Stadium. Photograph: Jason Cairnduff/Reuters

There are some matches in which the spectre of penalties begins to loom with indecent haste. Everybody knew where this last-16 showdown was heading from an early point in the second half – possibly even sooner – and yet it might have needed only a single penalty.

The second period of extra time was rumbling to its seemingly inevitable conclusion when Luka Modric finally picked a pass and, all of sudden, Ante Rebic was clean through. He rounded Kasper Schmeichel and was brought down by the chasing Mathias Jørgensen. Penalty. Modric took it but his composure deserted him. The kick was too close to the Leicester City goalkeeper and he pulled off the save. And so the match proceeded to the full version, the fate of these nations coming down to the time-honoured test of nerve.

Croatia passed it, just about, after a hit-and-miss shootout – which neatly reflected what had gone before. After two misses apiece, the Denmark substitute, Nicolai Jørgensen strode forward and saw his kick saved by Danijel Subasic. Ivan Rakitic had one to win it and he made no mistake. It is Croatia who advance to a quarter-final against Russia in Sochi on Saturday. Modric would score in the shootout. His blushes were saved.

The weird thing was that the game had exploded into life at the outset, with the goals coming with the first two moves. Only once previously at a World Cup had both teams scored inside four minutes – the group tie between Argentina and Nigeria in 2014.

What followed was the slow death of a spectacle. The goals were undercut by comedy defending but there would be little to smile about for the remaining 116 minutes.

Croatia had entered as arguably the team of the group phase. Everything had gone serenely for them and the thought did occur as to how they might react to a setback. The question was duly posed inside the opening minute.

Denmark swapped their left backs, with Jonas Knudsen coming in for Jens Stryger Larsen, and the new man brought the weapon of his long throw. From the first one, launched from the right touchline, a gaggle of defenders jumped but nobody connected and the ball broke for Thomas Delaney.

The midfielder’s control was instant and he made a nice move and pass for Mathias Jørgensen, who saw the shooting chance open up. He went for it, jabbing the effort low, and what followed seemed to happen in slow motion.

Domagoj Vida threw himself into a block but he did not make contact and Subasic was slow to get down. He got a hand to the ball but he could not prevent it from trickling inside the near post. It was a horribly soft concession and Subasic will not enjoy watching the replays.

Croatia’s response was immediate and this time it was the Danes who could curse their defending. Ante Rebic was afforded too much space on the right and his short pass inside released Sime Vrsaljko, who banged over the cross. It did not look threatening but Henrik Dalsgaard’s clearance was panicked, it hit the covering Andreas Christensen in the face and ricocheted to Mario Mandzukic, who swivelled and shot inside the near post. What a mess. What a start.

The remainder of the game felt like a reaction to the initial chaos. Neither team had previously conceded in open play at the tournament; they were not exactly disposed to such openness, and they sought to reimpose order. Caution held sway and it became an awfully tough watch.

Croatia tried to get on to the front foot in the first half, with Modric and Rakitic playing as No 8s. They had openings but on each occasion, the final action was missing. Rakitic and Rebic forced Schmeichel into a double save before Ivan Perisic fired the rebound high; Dejan Lovren glanced wide from a Modric free-kick – a good chance – and Rakitic ran on to a cutback only to shoot tamely.

Åge Hareide had tweaked his line-up but the creative burden still rested with Christian Eriksen. Almost everything in open play went through him. He flickered in the first half, seeing one effort blocked and playing in Martin Braithwaite, who shot straight at Subasic from a tight angle. There was also the moment when Eriksen floated a cross towards the back post and watched it drift against the angle of the upright. Subasic was relieved.

There were times when Eriksen pushed so high that he looked like a second striker. His stamina is the stuff of legend and the idea was that he could lead the press with the striker, Andreas Cornelius, who would be replaced by Nicolai Jørgensen.

It was tight and subdued; the emphasis on tactics rather than instinct and free rein. The locals in the crowd amused themselves with chants of Ros-Si-Ya. They were still giddy from their team’s penalty shootout win over Spain in the earlier kick-off and they were checking out what their quarter-final opponents had to offer. On this evidence, it was not a lot.

The entertainment value was low; the second half and extra-time featured little more than hopeful shooting from distance and the Modric penalty. It would need the full shoot-out to separate them. – Guardian service