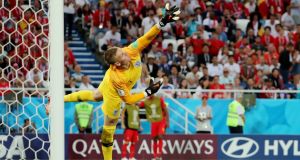 Gareth Southgate has defended Jordan Pickford and publicly reaffirmed his faith in his first-choice goalkeeper after the England No 1 came in for criticism over Belgium’s winning goal in last week’s final group game.

Pickford, who will start against Colombia in their last 16 match on Tuesday, endured a few nervous moments in Kaliningrad and was beaten by Adnan Januzaj’s curled attempt from just inside the penalty area, the winger benefiting from time and space to place his shot. The opposing goalkeeper, Thibaut Courtois, suggested the 24-year-old, at 6ft 1in, might not be tall enough. “The goalkeeper is 10cm smaller than me,” he told Belgian media. “I would have caught it. He was too busy throwing his legs in the air.”

Southgate, asked whether Pickford retains his confidence, said: “Absolutely. Yes. No question. I’m really pleased with his performances. He knows the belief I have in him. He is an important fit for the way we want to play, and I don’t think he’s had much chance with the goals that have gone in. That can be a goalkeeper’s lot at times. But he has to make sure he knows the views of those who are important and, like everyone else, cut himself away from the outside views that can start to inhibit your thinking.

“I remember when we were talking about young goalkeepers at a conference once, Martin Thomas – who is a brilliant coach educator now and was the England under-21s’ goalkeeping coach – was talking about the difference between a couple of goalkeepers and, size-wise, he was saying: ‘At the end of the day, we’re talking about a Cadbury’s Creme Egg between them.’ That’s what it is. So, yes, of course some keepers are 6ft 6in, but they have attributes that they’re not so good at. And you get slightly smaller ones who are athletically better and have different skill sets. So, it’s rare to find perfection in anybody.”

Southgate is expected to revert to the line-up that defeated Tunisia in their opening Group G fixture, with Dele Alli passed fit after a thigh strain, as England attempt to win only a third World Cup knockout game since the run to the 1990 semi-finals.

“The important thing this week is we’re calm and prepare in the way we have right the way through,” the manager told TalkSport. “We’ve played well. We’ve had good processes that have got us to this point. This game is only a big game because it’s the next one, and we want to be involved in bigger ones.

“So it’s important that they understand how much belief I have in them and they continue to play in the way we’re trying to play. We’ve got to be brave. We’ve got to be on the front foot. We’re playing in a style which I think the public are enjoying, and we’ve got to keep doing that. And if that goes wrong, then that’s my fault. But I want the players to be coming off the field feeling as if they’ve shown exactly how good they can be.

“We’ve got to have belief in the way we’ve been playing. The challenges do step up from now on in. But, over the last year or so, we’ve played France and Spain, Germany and Brazil, and played those teams for a reason. To prepare for this moment. It’s not a step up to a level we’ve not experienced before. We haven’t suddenly become ‘not the youngest team’ in the tournament overnight or ‘not the least experienced’. We are still progressing. But we are here in the knockout phase. Most of the big teams are now here still – not all of them – so we’re going to be involved in the games we want to be involved in. It’s hugely exciting for us.”