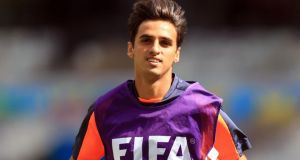 Before a ball was kicked few pundits expected Greece or Costa Rica to make much of an impression on this World Cup.

But now they face each other in a second round clash with the substantial prize before both countries an unprecedented quarter-final appearance.

Having emerged from a group containing three former world champions, Costa Rica have been the fairytale story of the tournament and are set to have the support of neutrals in the Arena Pernambuco in Recife as they return to the scene of their historic 1-0 triumph over Italy which secured their passage to the second round.

But with history hanging on the players’ shoulders this could be an attritional game. Greece’s negative, safety-first approach is well known but only the Netherlands have committed more fouls than the Central Americans so far in the tournament.

Costa Rica’s progress has been built on using their players’ superb conditioning to impose a high-tempo pressing game when opponents have the ball, meaning they have only conceded one goal – a penalty – in their first three matches.

In contrast Greece have looked one of the most ponderous sides in the tournament, especially through the middle and could suffer against hard-running rivals in Brazil’s northeastern heat. Costa Rica will have studied Colombia’s rapier counter-attacks down the middle of the pitch that produced two goals against the Greeks in their opening game.

The Central Americans will believe they are equipped to emulate the Colombians having shown more invention and variety than their opponents in the final third which they will look to exploit early on through their captain Bryan Ruiz and Arsenal loanee Joel Campbell who spent the season at Greek side Olympiakos.

“It would be great for us to score an early goal knowing that Greece like first of all to be defensively comfortable and sit back and are always looking to hit on the counter-attack,” said assistant coach Luis Marín ahead of the game.

Greece are playing in their first ever World Cup knockout match but they are unlikely to be overawed by the occasion or intimidated by the Latin support for their opponents.

That team won few friends with its ultra-defensive approach and the current side has not strayed too far from the formula with Portuguese coach Fernando Santos unrepentant for sticking with a safety first approach in what has been an attack-minded tournament.

“The mistaken perception is to think that every team should play like Brazil or Barcelona, but they have the characteristics to play that way,” he said ahead of the clash. “But we are Greece.”

Costa Rica coach Jorge Luis Pinto has a full squad to choose from while Santos must assess his after the bruising affair against the Ivory Coast which saw his goalkeeper Orestis Karnezis and midfielder Panagiotis Kone both injured, leaving them doubtful for Recife.

1 ‘A radical departure’: Who are CVC and what are their plans for rugby?
2 Ken Early: Why international football is fading into obscurity
3 Colin Kaepernick’s exile is too fresh for NFL to speak out on US protests
4 Connell losing touch with club championship is real tragedy of Normal People
5 Michael Jordan speaks out against George Floyd killing in rare statement
Real news has value SUBSCRIBE
Crossword Get access to over 6,000 interactive crosswords